The minutes of the latest FOMC meeting will be released at 18:00 GMT Wednesday. The Fed went out of its way to signal that rates will remain on the floor until 2024, despite the trillions in spending from Congress and the accelerated vaccination program. However, traders are saying that's a bluff. Market pricing still implies a rate increase by late 2022. Even if the minutes reaffirm the Fed's cautious message, the overall picture for the dollar still seems positive.Markets vs Fed

There is a clear dichotomy between what the Fed is saying and what markets believe is going to happen. Back at its March meeting, the central bank revised its economic forecasts higher, thanks to all the federal spending that Congress has unleashed. However, a majority of policymakers still indicated that interest rates will not be raised until 2024.

This signal was met with disbelief by investors, who seem to believe that a roaring economy is going to force the Fed to hike rates much earlier. Tremendous amounts of money have been thrown at the crisis, almost half the country has already received the first vaccination jab, and several consumers are simply waiting to be unchained. Markets have priced in the first rate hike by the end of 2022, and another two in 2023. 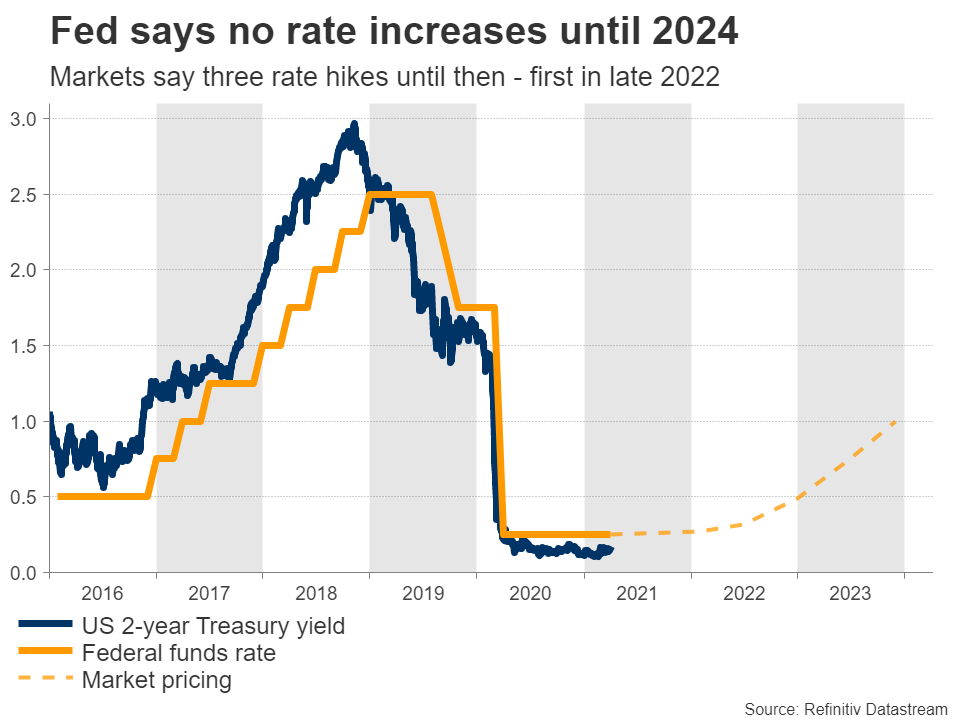 The Fed says it will be patient. Inflation will likely accelerate soon – thanks to a cocktail of supply disruptions, soaring commodity prices, and direct money transfers – but policymakers believe this will be a transitory episode. Plus, they have committed to allowing inflation to overshoot their 2% target for some time without acting.

The debate boils down to this: will any inflation episode truly be short-lived? The central bank thinks long-term structural forces will ultimately pull inflation back down. Globalization and technological advancements, an ageing population, and the lack of worker bargaining power in wage negotiations imply low inflation over time. The counter is that we have never given money directly to people and that globalization has been slowing for some time now.

What do the minutes hold?

The minutes will give us a sense of where the entire Committee stands on inflation and the timeline of rate increases. For instance, if the minutes show that several members would support an earlier rate increase than suggested by their forecasts in case the economy is stronger, that could vindicate market pricing and boost the dollar.

Taking a technical look at euro/dollar, initial support to declines could be found near the 1.1785 zone.

On the other hand, if the minutes simply reaffirm that any inflation overshoot will be temporary and that rates probably won't rise for several years, then market pricing could come closer to the Fed and the dollar might drop a little. In this case, euro/dollar could edge higher towards the 1.1880 region.

Either way, the minutes are unlikely to move the needle much, and any market reaction could be minor. The Fed has already telegraphed what it believes, and the market isn't buying it. Incoming economic data will prove who is right.

In the bigger picture, it is difficult to be pessimistic about the dollar. The American economy is currently stronger than Europe's thanks to fewer lockdowns, is miles ahead in the vaccination race, and has way more stimulus coming. Ultimately, all this translates into the Fed raising rates years before the European Central Bank does.

The main counterargument is that most of this narrative is already priced in now. However, considering that leveraged funds are still net-long the euro, there is likely more scope for euro/dollar to retreat from here, as speculative positioning approaches neutral levels.

Finally, note that Chairman Powell will also deliver some remarks at around 16:00 GMT on Thursday.