The US employment report will hit the markets at 12:30 GMT Friday, and forecasts suggest the American economy added another 1.6 million jobs in July. Why is the consensus so optimistic even though the US recovery is losing steam? The answer lies with the period which the data were collected in. Overall, the risks seem tilted towards a disappointing, but positive NFP print. As for the dollar, whether the recent downfall continues will depend mostly on what Congress does. Too early for NFP to show real pain

The US economic recovery seems to have stalled in July. A variety of high-frequency indicators confirm as much, thanks to the spike in infections that forced several states to roll back their re-opening plans. It’s only logical then to ask: why are economists expecting such a massive comeback in the labor market?

In other words, it may be too early for the jobs report to reflect what other data points are telling us about the setback in the economy.

Or are economists just complacent?

While it may be too soon for an outright decline in payrolls, falling short of the rosy forecasts is entirely plausible. For one, there’s huge dispersion among forecasters. The most optimistic one expects NFP at 4 million, while the most pessimistic call is for -280k. 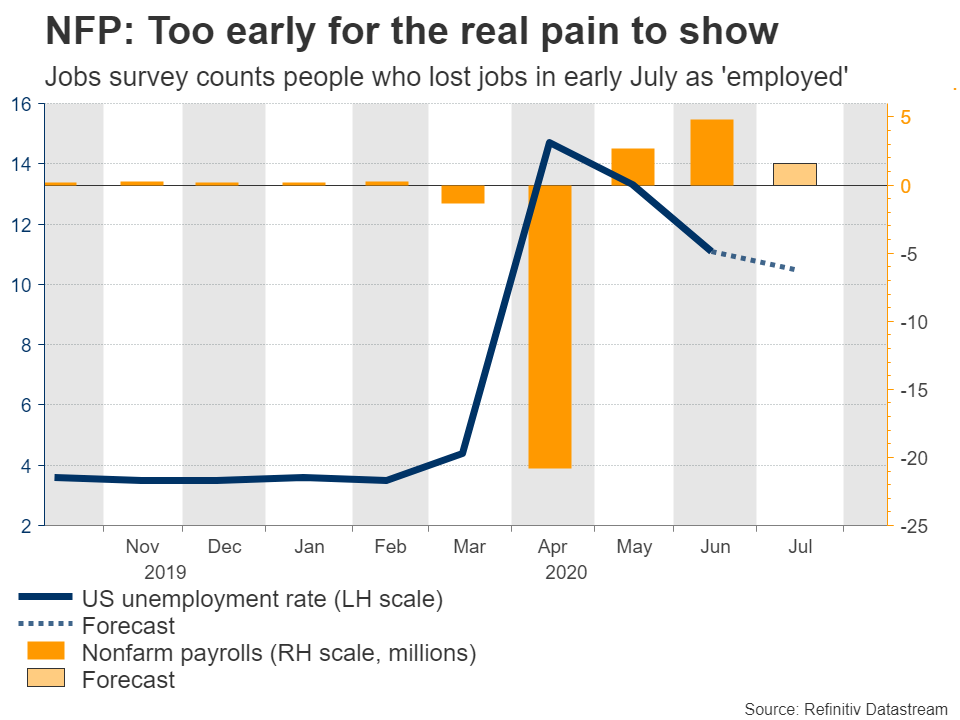 More importantly, the Census Bureau has started to release a weekly jobs tracker – the Household Pulse Survey – and this was quite accurate in June, when it implied a much stronger NFP print than the consensus. This time, the survey suggests 6.7 million Americans lost their jobs between mid-June through mid-July, including a 4.1 million decline from the first to the second week of July.

Again though, the people that lost their jobs in early July will probably be counted as ‘employed’ in this jobs report, so a negative print is probably off the cards.

Disappointing, but positive print most likely

As such, the most likely scenario seems to be one where NFP remains positive, but perhaps falls short of the 1.6 million consensus. The ADP jobs report for July also implies that much, having clocked in at just 167k. A disappointment might weigh on the dollar, albeit not much, as a lot of pessimism has already been priced in.

Instead, the bigger variable for both the dollar and stocks will be whether Congress strikes a deal on a new relief package soon. Crucial unemployment benefits have already expired, cutting off a vital lifeline for millions of Americans, and the latest reports suggest lawmakers are still not close to a new deal. The longer this deadlock persists, the greater the risks for consumption and the recovery.

Admittedly, a deal will probably be hashed out soon. The stakes are too high, and no politician wants to be blamed for wrecking the recovery ahead of an election. Markets seem to share this view, judging by the muted reaction so far. That said, the longer we go without signals that a deal is imminent, the more nervous investors might become.

Hence, if this week concludes without a deal, then risk aversion might return as traders trim their riskier bets. But once a deal is found, that could reignite risk appetite, giving markets the green light to push even higher. For the dollar, that might imply more pain, as the reserve currency has been acting mostly as a safe haven lately.

On the downside, initial support may be found near 1.1805, with a downside violation turning the focus to 1.1710.

US housing data, core PCE inflation next on the calendar – Forex News Preview