Daily Market Comment – All quiet before ECB and US CPI; dollar resists slump in yields 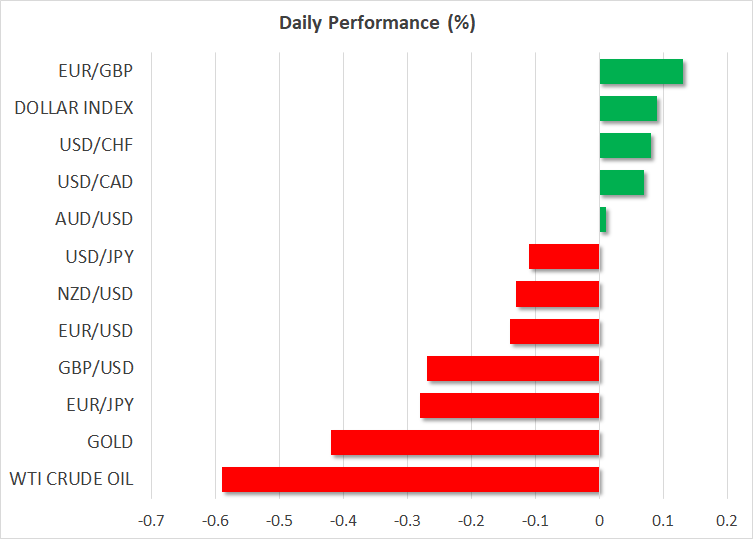 ECB and US CPI ahead: calm before the storm?

Trading got off to another lacklustre start on Thursday, with major currencies and equities subdued and the volatility confined to the bond market. However, the unusual lull is unlikely to last much longer as the European Central Bank is due to announce in the next few hours whether it will continue to buy bonds at a “significantly higher pace” or if purchases will be slowed slightly.

ECB policymakers have gone all out lately to dispel any speculation about early tapering. However, the most dovish the ECB can get is to signal that it will use the full PEPP envelope, as an extension of the programme is extremely doubtful. Still, with investors not having to worry about the cut-off point until March 2022, maintaining an accelerated pace for now might just be enough to keep markets happy and the euro tamed.

That puts all the more pressure on President Christine Lagarde as any slipups about future adjustments to the pace of asset purchases in her press conference at 12:30 GMT could undermine the dovish message.

With future policy changes likely to dominate discussions at the Federal Reserve when it too meets in a few days’ time, today’s CPI numbers out of the United States will be watched for any possible clues about a tapering timeline.

However, regardless of how strong the headline CPI rate comes in for May, the Fed is only expected to take baby steps towards slowing its bond purchases and the recent moves in the bond market might play a bigger role in the scale of any fallout.

Are the doomed infrastructure talks to blame for the slump in yields?

Government bond yields globally have been heading south all week, led by US Treasuries. There doesn’t seem to be a clear catalyst for sparking this rush towards government bonds as nothing has fundamentally changed as far as Fed policy or the inflation outlook are concerned. However, one possible explanation could be the setback in Washington by the Biden administration to find support for its legislative agenda.

Talks to reach a bipartisan deal on a big infrastructure bill have run into trouble this week. But Republicans are not the only problem as President Biden is also having a hard time convincing moderate Democratic Senators to back his ambitious spending plans. Furthermore, with time running out to pass major legislation ahead of next year’s midterm elections, Biden’s spending goals are looking unattainable right now, and for the bond market, that can only mean there will be significantly less supply on the way over the next few years than anticipated not so long ago.

The 10-year Treasury yield was somewhat steadier today, inching up to 1.4975% but not far from yesterday’s one-month lows.

Stocks look to ECB, US data for direction

In equities, there was little support from the lower yields as doubts about the next phases of Biden’s pledged stimulus weighed slightly on risk assets. But overall, markets were focusing on the ECB and US inflation data, as well as on the latest weekly jobless claims, to get a sense of direction.

European shares were mostly lower on Thursday and US stock futures were mixed following small losses on Wall Street yesterday. Asian stock markets had a moderately better session, lifted by positive trade talks between US and Chinese officials.

However, discussions between Britain and the European Union to resolve the row over customs checks with Northern Ireland have not been going so well, dragging the pound below $1.41 today. Negotiations to end the deadlock are ongoing but Brexit woes are not the only headache for sterling as daily Covid infections in the UK topped 7,000 on Wednesday – the highest since late February, threatening to pause any further relaxation of virus curbs.

The euro was also weaker ahead of the ECB announcement, but only marginally, while the loonie was little changed after the Bank of Canada kept policy on hold yesterday, as expected.

The Australian and New Zealand dollars fared slightly better, edging up versus the greenback, which was unusually steady in spite of all the action in the Treasury market. The dollar index nudged up on Thursday, having bounced back from a brief spike lower yesterday.