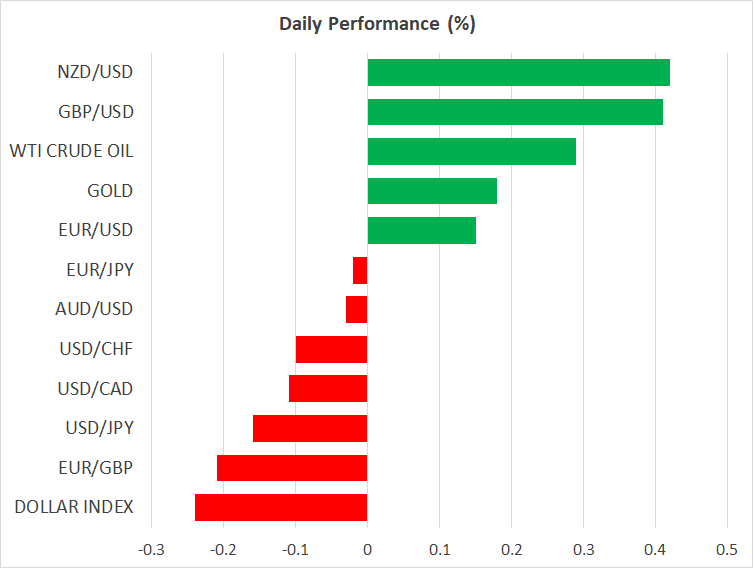 Wall Street hit a rough patch last week, as investors finally paused to assess the utopian valuations in the tech sector. Vanishing hopes for a new relief package out of Washington D.C. and news that some coronavirus vaccines might be delayed because of safety concerns likely added fuel to the ‘de-risking’ process.

Likewise, expectations that the Fed will ride to the rescue this week by injecting markets with more stimulus may have evaporated, given the strength of recent data. Consumption has bounced back nicely, the jobs market is recovering at a healthy clip, and the latest CPI numbers showed core inflation is heating up – all of which implies policymakers can afford to postpone major policy decisions until after the election.

But all these concerns have taken a back seat on Monday, with European stocks being a sea of green and futures tracking the S&P 500 pointing to a ~1.5% higher open on Wall Street, following some encouraging vaccine news.

Vaccine developer AstraZeneca announced it will resume its phase three clinical trials in the UK, after the study was paused last week on safety worries. Meanwhile, Pfizer’s CEO hit the airwaves over the weekend to talk up the prospect of his own company having a vaccine ready before year-end.

The positive sentiment spilled over into the FX sphere as well. The greenback is softer to start the session while risk-sensitive currencies like the British pound and the kiwi dollar are cruising higher, albeit not dramatically.

Over in Japan, the ruling Liberal Democratic Party has just chosen Yoshihide Suga as the successor of outgoing Prime Minister Abe. Suga has been a close aide of Abe’s for several years and has vowed to continue with ‘Abenomics’. The reaction in the yen was minimal, as he was the overwhelming favorite to win the inter-party election.

Yet, the political turbulence may just be getting started, as there are rumors that Suga’s first move will be to call an early general election. The rest of Abe’s term would end in one year, so Suga might call a snap election now that he is riding high in opinion polls and his party is unified behind him, to maximize his chances of winning a full term in office. The yen might get a lift from such an announcement, as an early election would represent a risk to the continuity of Abenomics, which have been instrumental in weakening the currency over the past decade.

Over in the UK, the pound has staged a minor comeback today. The driving force of this rebound is the calmer mood across financial markets, though traders may also be bracing for a key Brexit vote later today (~21:00 GMT).

The highly controversial Internal Market Bill – which many have criticized as an attempt to violate international law – will be debated in the House of Commons. This bill has received severe backlash from all factions of Parliament, including several of Boris Johnson’s Conservatives, who fear that his attempt to play hardball with the EU could cost Britain heavily by tarnishing its international reputation.

If Parliament blocks the bill, that would send a strong message of de-escalation in the Brexit process, and likely lift the pound. On the flip side, an approval would set the stage for more brinkmanship and negotiating ‘power plays’ over the coming weeks, likely bringing the pound under renewed selling interest.