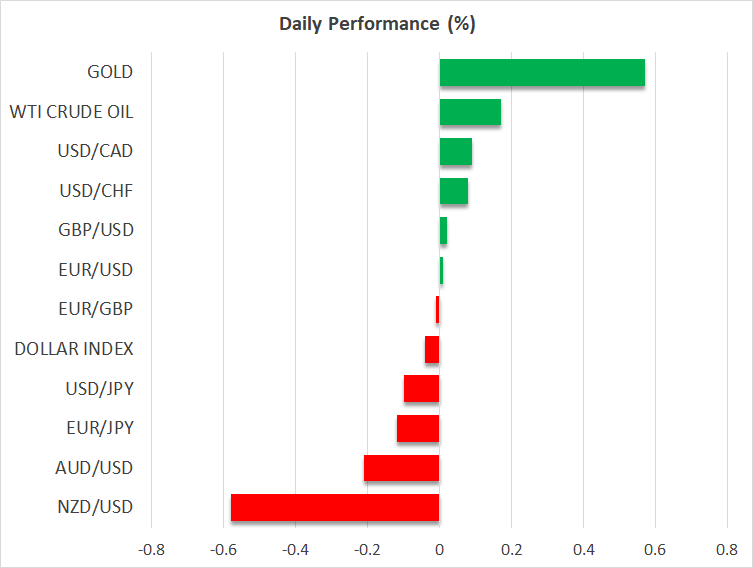 Market sentiment got off on the wrong foot at the start of the new trading week after Taiwan and Singapore announced tighter restrictions to tackle a worrying spike in Covid cases in recent days. The renewed virus jitters have startled investors as much of the attention lately had been focused on the accelerating vaccination pace in America and Europe. The rare negative headlines from Asia are not only a reminder that we’re not out of the woods just yet but also put into the spotlight how painfully slow the region’s vaccine rollout has been thus far.

There was no widespread fallout in the markets, however, as the impact was localised, with stocks in Taiwan plunging 3% but most major bourses across Asia managing to close higher. Shares in Singapore also ended the day up, reversing earlier declines, and Chinese stocks extended Friday’s rally despite a weaker-than-expected rise in April retail sales raising doubts about the recovery in consumption in China.

Nevertheless, there was a notable shift towards safe havens on Monday as bond yields slipped and gold jumped higher. The 10-year Treasury yield brushed a six-day low of 1.605%, cancelling the gains made on the back of last week’s strong US CPI report. The safe-haven gold climbed above $1,850/oz for the first time in three months, as apart from the fresh fears about rising infections in Asia, persisting worries about higher inflation also bolstered the precious metal.

Inflation expectations around the world continue to edge up as the constant build-up of price pressures in factory input costs as well as soaring commodity prices are making investors question central bankers’ narrative that the current surge in inflation will be temporary.

US market-based inflation expectations have risen to multi-year highs and business and consumer surveys are portraying a similar trend. Consumers’ one- and five-year inflation expectations hit more than a decade high according to the University of Michigan’s preliminary report for May. This could already be influencing some spending decisions as the UoM’s consumer sentiment gauge unexpectedly fell in May.

But while markets are clearly nervous about the unwelcome developments in inflation and possible negative implications on the economy, expectations that the Fed won’t rush in to tighten policy in response are shoring up sentiment for now. Friday’s disappointing retail sales numbers out of the US, which came hot on the heels of April’s poor jobs report, have eased concerns about an early tapering move by the Fed.

Investors will be eyeing what Fed policymakers’ latest views are when a number of them speak this week, including Vice Chair Richard Clarida today at 14:25 GMT. Their remarks will likely draw attention away from Wednesday’s FOMC minutes from the April policy meeting.

Dollar flat as euro and pound hold onto gains

But some traders could nonetheless be staying on the sidelines ahead of the minutes as the US dollar was struggling for direction today. The dollar index was last flat, barely recovering from Friday’s slump. The euro and pound were marginally higher, showing little reaction to news that the Indian variant of Covid has started to spread in the UK and could delay the next phase of the reopening in June.

The UK government has responded by stepping up vaccinations in the affected areas and this could be why both the pound and euro are holding their ground while the aussie and kiwi are down sharply today. Australia’s and New Zealand’s vaccination record pales in comparison to that of the UK and the EU, hence, the antipodean dollars may be more susceptible to worrying virus headlines.