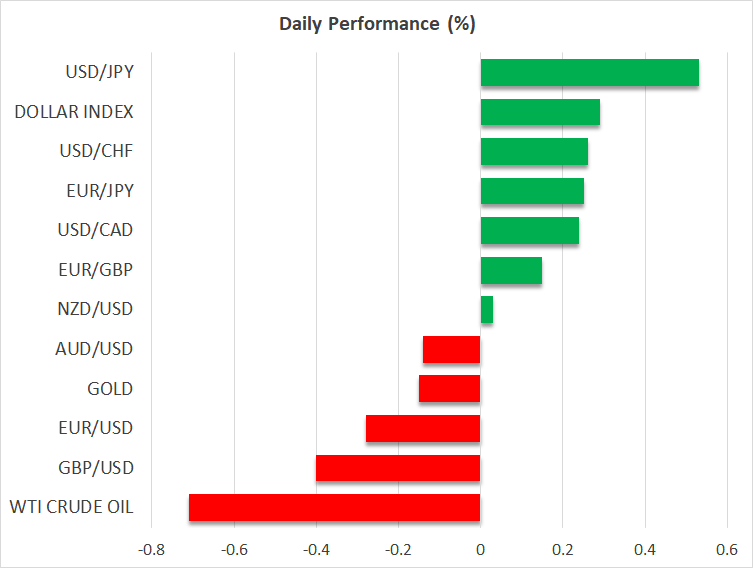 Equities in another show of resiliency

US futures slipped early on Monday and European shares were mixed as the Apple-led risk rally faded somewhat, with investors turning more cautious ahead of the Fed’s highly anticipated policy decision on Wednesday. Wall Street unexpectedly surged on Friday despite US data underscoring the ‘higher for longer’ case when it comes to interest rates.

A pickup in core PCE inflation and solid personal income and spending numbers for September initially weighed on stocks, adding to the tech rout triggered by last week’s sluggish earnings results from the likes of Alphabet, Microsoft and Meta. But it only took an earnings beat from Apple to revive risk appetite.

Stellar results from energy giants ExxonMobil and Chevron helped too, with all three of Wall Street’s main indices gaining by 2.5% or more.

Is the wait for peak Fed hawkishness almost over?

Investors seem to be in two minds about the implications of a still healthy economy, which has yet to show any signs of a broad-based downturn in the face of several lofty rate hikes by the Fed. On the one hand, a growing economy bodes well for the earnings outlook, but it also gives policymakers the green light to keep lifting rates.

Ultimately though, the priority for the markets is for the Fed to reach peak hawkishness, and although a 75-basis-point rate hike is a done deal this week, investors are hoping that Powell will signal a slower pace going forward in his press briefing.

If there is some hint of that on Wednesday, that may be enough to sustain the current rebound that has seen the S&P 500 recover more than 10% from its October lows.

However, it’s not all about the US economy as there are fresh concerns about a worsening slowdown in China. The Chinese government’s own PMI gauge showed the manufacturing sector unexpectedly contracted in October. Add to that the ongoing regional lockdowns, the latest of which has affected Apple supplier Foxconn’s plant, and the market mood is slightly more sombre today.

Dollar perks up as pound and yen skid

The caution is helping the US dollar recoup some further lost ground after last week posting a lower low against a basket of currencies in what may have been a sign that it has peaked. A stronger yen and pound have been major contributors to the dollar’s downfall, but of course all that may change if the Fed keeps its options open regarding the pace of future rate increases.

The pound’s relief rally may have further to go as the Bank of England looks set to join the 75-bps bandwagon on Thursday, while newly appointed Prime Minister Rishi Sunak and his chancellor, Jeremy Hunt, will probably attempt to further rein in Britain’s soaring budget deficit. But for now, sterling has started the week on the backfoot against the greenback.

The Japanese currency is also under pressure again, with the dollar climbing back above 148 yen, having retreated substantially on suspected Bank of Japan intervention last week.

The Australian dollar is struggling too as the Reserve Bank of Australia is unlikely to steer away from its recent shift in its policy stance of raising rates by only 25-bps increments when it announces its latest decision at 3:30 GMT on Tuesday.

The euro was no exception, being unable to gain on the back of hotter-than-expected flash inflation figures out of the Eurozone today.

Most commodities were down on Monday, weighed by the worrying PMI data out of China. With no change in sight to China’s zero-Covid policy and Beijing seemingly no longer prioritising growth over Xi Jinping’s other ambitions, there are big question marks about the outlook for commodities such as copper that have relied on Chinese demand for so long.

Crude Oil futures, meanwhile, were heading lower for a second day, and although the deepening slowdown in China is a headwind for oil too, OPEC’s recent output cut is likely limiting the selloff.

Wheat bucked the trend, however, as futures soared after Russia decided to suspend its participation in the UN-backed deal that allows Ukraine to export grain. Wheat futures were last up about 6%.