FX quiet too as traders search for the next big theme

US jobless claims and Disney earnings top the agenda today 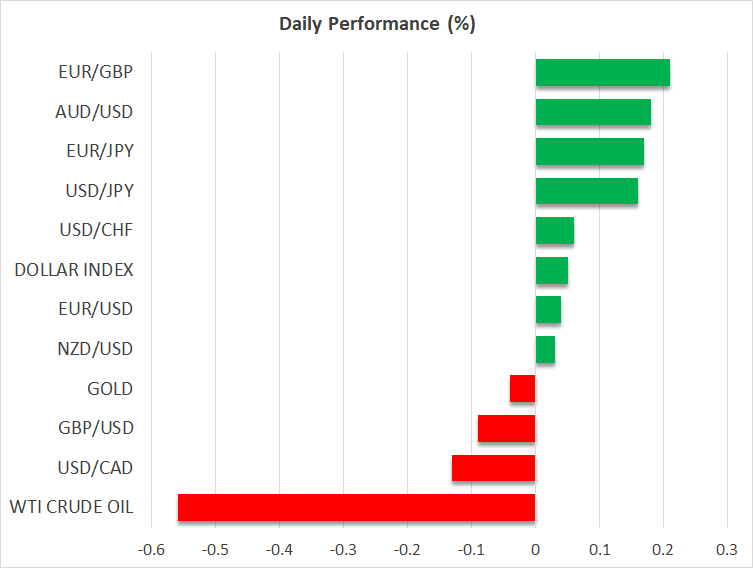 Is the stimulus narrative losing its bang?

It was a quiet session across global markets, with most equity indices closing virtually unchanged near record altitudes and the prominent currency pairs trading in narrow ranges. Sometimes though, the lack of action itself speaks volumes.

Investors had their gaze locked on the US inflation data and a speech by Fed chief Powell. The CPI readings fell short of expectations, signaling that the inflation beast is still in a deep slumber and that any stimulus withdrawal from the Fed is a long way off. That message was quickly reinforced by Powell, who struck as dovish a tone as possible.

He highlighted that real unemployment may be closer to 10% and that even if there is a burst of inflation, his central bank won't react to it. He remained adamant that policymakers "won't even think about" removing stimulus until the pandemic has passed. Overall, he tried to dispel fears that the barrage of spending coming from Congress will have much of an impact on the Fed's normalization timeline.

Normally, promises of endless Fed liquidity coupled with an inflation disappointment would be great news for stocks and dismal news for the dollar. The fact that neither responded much yesterday may be a signal that the stimulus theme is slowly losing its touch in juicing up markets, and that investors are searching for something new before taking on even more risk.

The broader FX battleground was calm as well. The British pound continued to hover near its recent highs, as traders weighed a fragile economy against the prospect of a swift recovery ahead.

The UK has now vaccinated almost 20% of its population with the first dose, covering most of its elderly citizens that are most at risk from the virus. This means hospitalizations are likely to fall dramatically soon, allowing the economy to re-open in a sustainable manner. In contrast, the Eurozone's immunization campaign remains painfully slow, pointing to a divergence in economic fortunes that may keep euro/sterling under pressure.

The commodity currencies went nowhere either, even as the outlook for their respective economies has turned brighter lately. The Canadian dollar for example has hardly responded to the stunning rally in crude oil, nor has the New Zealand dollar made any real headway despite an incredibly solid domestic economy and fading expectations for RBNZ rate cuts.

The euro continues to trade mostly as a mirror reflection of the dollar, with headlines that Germany will extend its lockdown until early March inflicting no damage on the single currency. At this stage, a double-dip recession seems almost unavoidable and the ECB will likely be among the last major central banks to exit from cheap money policies.

There isn't much to drive markets today either. The highlight on the economic calendar will be the weekly US jobless claims, which might attract some attention given the soft employment reports lately.

In corporate earnings, Walt Disney will report its quarterly results after Wall Street's closing bell. The entertainment conglomerate is expected to post quarterly losses but its share price still hit new record highs this week, which is not something you see often.

The pandemic essentially forced Disney to change its strategic focus, turning the ship away from theme parks and towards its booming streaming service. As such, the media empire has stopped trading like an 'old economy' stock and has been repriced almost like a technology share.

Daily Market Comment – Dollar steadies ahead of US inflation shockwave