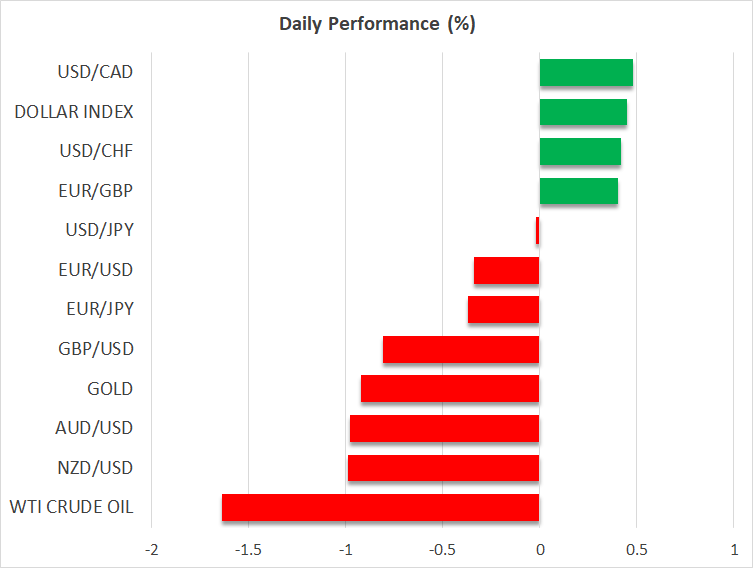 No inflation peak in sight

Inflation in the United States jumped to a fresh 40-year high of 8.6% y/y in May, confounding expectations that it would hold steady at 8.3%. The month-on-month rate increased by a shock 1% and core CPI also rose by more than forecast, dashing hopes that inflationary pressures might have started to settle down.

The strong CPI reading comes just days before the Federal Reserve is set to announce its next rate hike decision. Although half-point rate increases are already baked in for both June and July, the Fed will publish its updated dot plot on Wednesday and after the latest CPI beat, it’s very likely the median dot will shift higher.

Before Friday’s hot inflation numbers, investors were optimistic that a peak was in progress, which would have allowed the Fed to pause, or at the very least, to slow down the pace of tightening to 25 basis points in September. That doesn’t seem very likely now. Instead, there’s a high risk policymakers will signal a 50-bps hike for September, and possibly for November too.

Bond yields shot up in the aftermath of the data, with the US 10-year yield rallying to a near four-year high of 3.25% today. Eurozone yields, which were already roiled a day earlier following the ECB’s hawkish rate hike forecasts, also climbed sharply.

More specifically, part of the US yield curve has inverted after the five-year yield rose above the 30-year one on Friday, in a possible warning sign for a looming recession.

The spike in both short- and long-dated Treasury yields as well as the heightened worries of an economic downturn boosted the US dollar, pushing its index towards May’s two-decade high.

The yen also benefited from the risk-off sentiment, rising against all of its major peers except for the greenback, which briefly hit a 24-year top of 135.17 yen.

The yield on 10-year Japanese government bonds cracked the upper limit of the Bank of Japan’s yield cap of 0.25% today, providing the yen an additional lift. But it has also put BoJ policymakers in a predicament ahead of the Bank’s policy decision on Friday.

The Bank of Japan is one of four central banks meeting this week and before the latest moves in the bond market, its decision was the most likely to be a non-event. But some kind of a tweak to its yield curve control policy cannot be ruled out now.

This week’s other central bank meetings are the Bank of England and Swiss National Bank. Speculation is mounting that the SNB will announce the start of its exit from negative rates on Thursday, though it will probably wait a bit longer before doing so. The Bank of England is anticipated to hike rates by 25 bps again the same day but after today’s very disappointing GDP figures out of the UK, policymakers might be hesitant to signal further tightening.

The UK economy unexpectedly contracted in April, with output in all sectors declining and dragging GDP down by 0.3% month-on-month. The pound was last trading 0.8% lower on the day at $1.2216 and could soon breach the $1.22 level as Britain looks increasingly likely to enter a recession amid the spiralling cost of living that is pressuring consumers.

In equities, Asian and European stocks slumped at the start of the week’s trading following the selloff on Wall Street on Friday. The S&P 500 and Nasdaq Composite plummeted by 2.9% and 3.5% respectively, as expectations of the Fed taking its foot off the brake pedal faded quickly after the CPI data.

US futures point to further steep losses today. E-mini futures for the S&P 500 indicate it could drop below the May low and slip below the 3,800 level. It’s hard to see this week’s central bank meetings providing any relief for equities unless of course by Wednesday, the mood has turned so sour that if the Fed isn’t any more hawkish than what is feared by investors right now, dip buyers might have a reason to step in.

View All
XM Research - 39 minutes ago