Dollar and pound give back ground as bond yields cool downEuro and yen enjoy a relief rally – can it last?Stocks trade quietly, oil shaky, FOMC minutes in sight 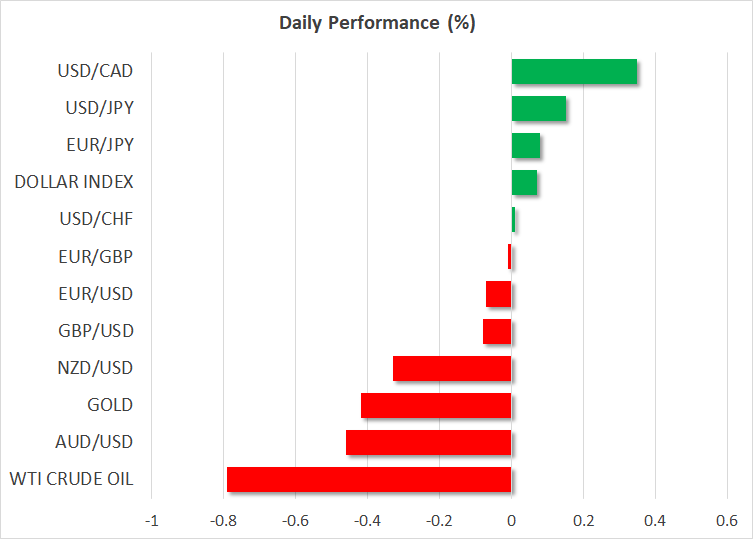 The new quarter has turned the tables in the currency market, as the rally in bond yields that turbocharged the dollar along with sterling last quarter seems to have run out of fuel for now, breathing some life back into the devastated euro and yen. Treasury yields have cooled down in recent sessions, diminishing the dollar's rate advantage.

Despite the incredibly encouraging flow of US economic data lately, market participants are no longer 'certain' that the Fed will raise rates again in late 2022. Additionally, foreign demand for US Treasuries seems to be growing, as investors in Europe and Japan search for yield abroad. These factors are pushing yields lower, dragging the mighty dollar down.

The main beneficiaries of falling yields are the lowest-yielding currencies, namely the euro and yen. Since they were hit the hardest when yields roared higher and rate differentials widened against them, it is only natural to see them stage a relief rally now as yield spreads compress again.

Overall though, this seems like a setback in the trends that have dominated this year, not a reversal. The economic fortunes for America and Britain remain infinitely brighter than those for Europe and Japan thanks to the divergence in vaccinations. In the case of America/Europe, there's a stark difference in stimulus too. Nothing moves in a straight line for long, so a correction was overdue, but ultimately the wind seems to be blowing in the dollar's favor.

The prime reason the outlook for the euro seems so bleak, is that there's little chance of Europe catching up in the vaccination race. The European Commission laid out an ambitious plan for reaching 'herd immunity' by the end of June.

However, the European Medicines Agency admitted yesterday that there's a link between the AstraZeneca vaccine and blood clots. The agency continues to recommend the vaccine because the benefits outweigh the risks, but the negative press coverage is immense and there's a chance individual countries might suspend it again.

It's hard to be optimistic on the euro, with the region still partially locked down, behind in stimulus, and unlikely to catch up in vaccinations. The strongest arguments in favor of the euro are that most of the bad news is already priced in, and that some benefits from an exceptional US recovery will spill over. Those are not exactly inspiring. With leveraged funds still net-long the euro, there might be scope for more downside.

It was a quiet session in the stock market. The major US indices retreated a shade but remained within touching distance of their recent highs, supported by the retreat in yields.

Things were more exciting in the energy arena. Crude oil prices almost erased an early rally after a round of “constructive” talks between America and Iran about resurrecting the nuclear deal between them. There wasn't any major breakthrough, though diplomats suggest that things are moving in the right direction.

This risk has flown beneath the market's radar so far because the talks are still in their early stages, but at some point, the threat of Iranian production returning in force will hang like a sword over crude prices.

As for today, all eyes will be on the minutes of the latest FOMC meeting, due out at 18:00 GMT. There's a clear dichotomy between the Fed and investors about when interest rates will be raised again, with market pricing indicating a much earlier rate hike than that projected by policymakers.

Daily Market Comment – Will the ECB disturb the waters?

Daily Market Comment – Can the Bank of Canada pull off a 'cautious' tapering?