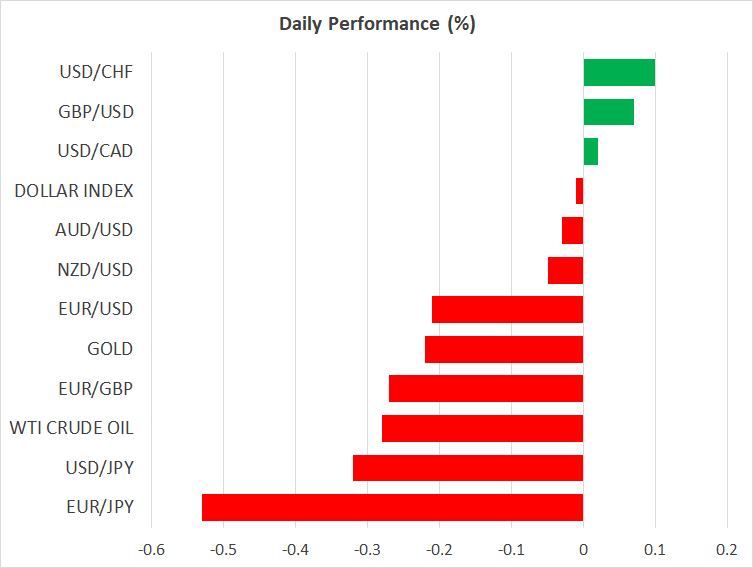 Dollar feels the ‘risk on’ blues

There’s no love for the US dollar out there. The reserve currency remained on the back foot on Thursday, surrendering some of the gains it posted after the FOMC minutes played down the prospect of imminent shifts in Fed policy. This weakness likely reflects the fact that the Fed has already ‘out-printed’ every other major central bank, flooding the financial system with dollars.

As much as investors hate the dollar right now, they love equities and specifically tech heavyweights like Apple (+2.2%), which have almost metamorphosed into defensive plays in this new era because of their ability to grow even as the world falls apart. The tech-heavy Nasdaq 100 set another record high on Thursday, bringing its total gains for the year to an astonishing 31.4%.

Beyond the Fed’s liquidity barrage and the substantial fiscal firepower already deployed, another factor driving investors away from the greenback’s safety and towards equities is the constant volley of encouraging vaccine headlines. The latest one came from Pfizer and BioNTech, which said the vaccine they are jointly developing is set to be submitted for regulatory approval in October.

What’s striking is that the currency market has turned a blind eye to relative virus developments between countries. New cases in Spain and France are rising at the highest pace since the lockdowns were lifted, igniting concerns about what kind of measures these governments may be forced to take to rein in the outbreak again.

Admittedly, one reason the market doesn’t care yet is that hospitalization and fatality rates thankfully remain low, as it is mostly younger people that are getting infected. But as we have learned, that’s usually a prelude for more concerning developments a few weeks later.

Even if it never comes to that and fatality rates stay low, this brewing ‘second wave’ implies social distancing measures will remain in place for even longer, keeping the pressure on smaller businesses that will have to operate at minimal capacity. That’s ultimately trouble for employment.

This realization may be finally sinking into the minds of market participants, following the Eurozone’s preliminary PMIs for August. Both the French and the German composite PMIs declined substantially, with the services sector leading the slowdown. The surveys highlighted that employment continues to decline as demand stutters, casting doubt on the V-shaped recovery narrative.

The market reaction was minimal, with the euro/dollar falling only modestly. Yet, euro/sterling and euro/yen took a bigger hit, so it appears that dollar weakness is what’s keeping euro/dollar afloat.

A lot of data still on the docket

There’s still a lot of data left on the calendar for today, with PMI releases for August also coming up in the UK and the US. In Canada, retail sales numbers for July are due out.

In politics, there doesn’t seem to be any progress yet in the Congressional stimulus negotiations, which is perhaps another factor keeping the dollar under the hammer. But this might be a two-sided risk, because if by some miracle lawmakers manage to iron out a deal, it could ignite a serious dollar short squeeze. 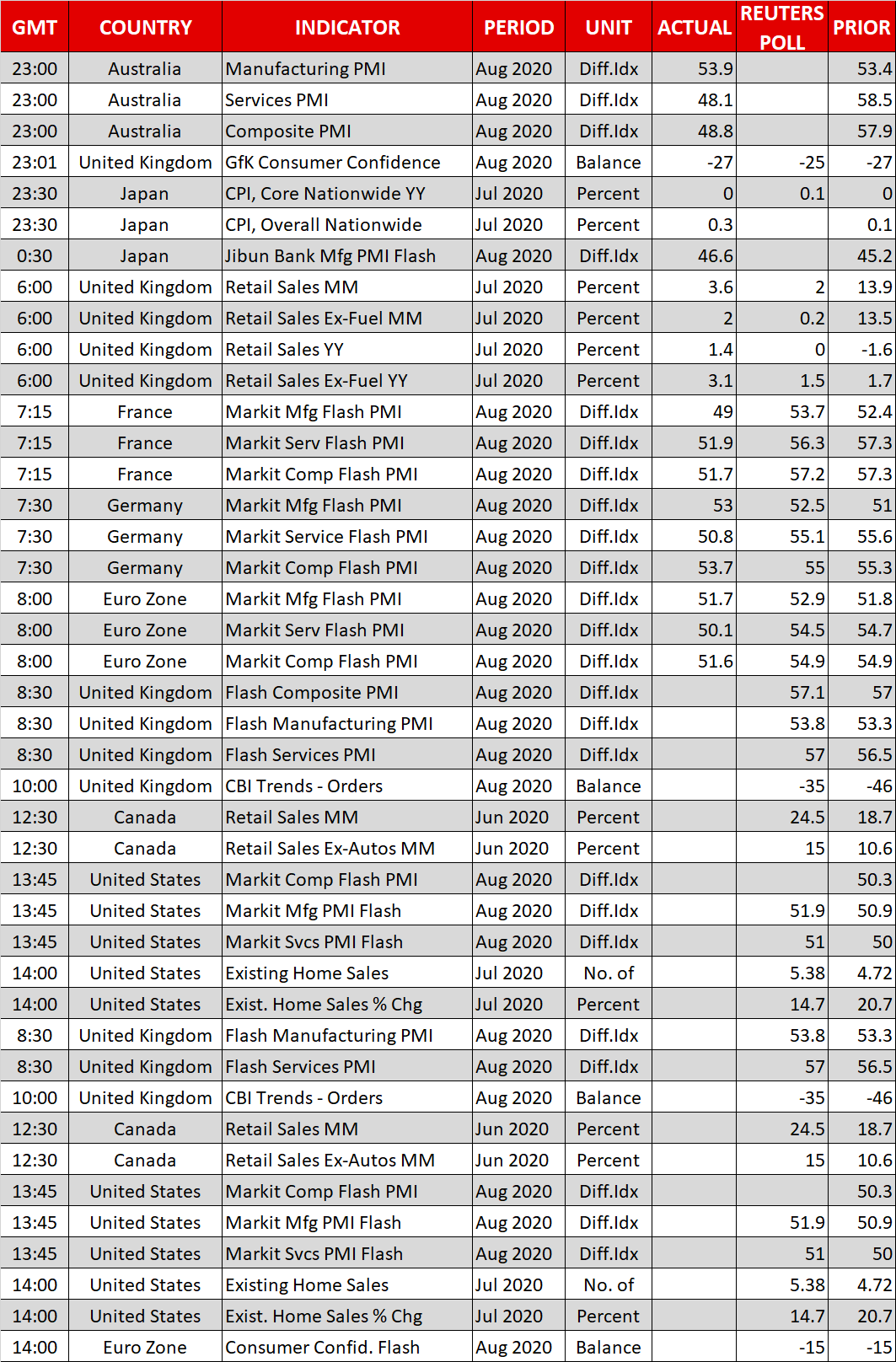 View All
XM Research - 15 hours ago