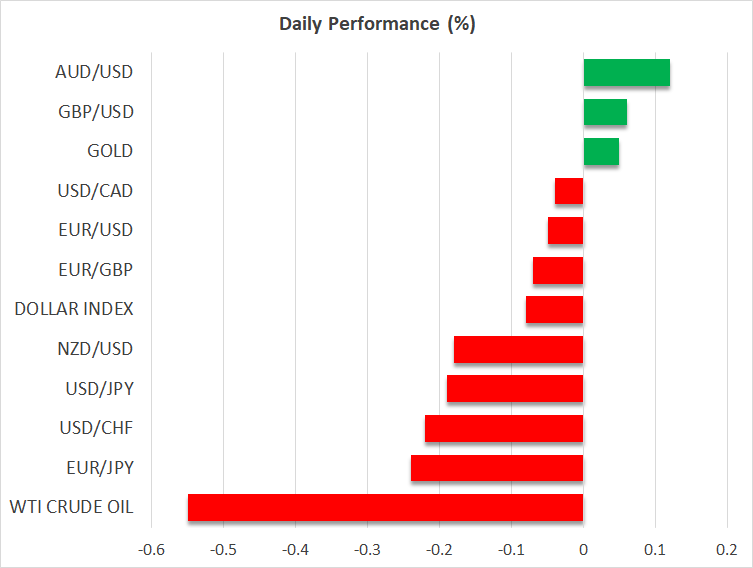 The US dollar lost further ground against its major peers on Tuesday. It seems that investors continued to weigh the prospect of slower rate increases by the Fed as they await results of the US midterm elections and the US inflation data.

According to the Fed funds futures, they are now assigning a 67% probability for a 50bps hike at the next Fed gathering and 33% for a 75bps increment. Up until last week the market was split on the size of the next rate increase, but with the ballot counting of the US midterms adding credence to estimates that the Republicans could secure a majority at least in the House of Representatives, chances of another triple hike are dropping.

A gridlocked Congress would diminish the possibility for fiscal support measures, leading to slower growth and perhaps easing inflation, which means less need for more super-sized rate increases by the Fed. This is negative for the dollar, which stabilized today though, but even if it doesn’t skid much further from current levels due to a split Congress being mostly priced in, investors have another top-tier event to deal with and this is the US CPI data on Thursday.

Expectations are for both the headline and core CPI rates to have slid, which is a step in the desired direction and may add to hopes of a less aggressive Fed henceforth, thereby allowing a deeper correction in the greenback. That said, any bearish trend reversal in the US dollar likely remains off the charts for now. With several other major central banks also leaning towards slower rate hikes, the Fed could hold onto first place in terms of hawkishness, while China’s back-and-forth headlines are unlikely to permit a prolonged selling of the safe haven.

Just a day after Chinese officials said that they are indeed considering relaxing the strict COVID curbs, albeit at a slow pace and with no specific timeline, surging infections led to the imposition of new lockdowns in the southern metropolis of Guangzhou.

This is maybe one of the reasons why most Asian indices traded in the red today, despite earlier gains in European and US stocks on Tuesday. The other driver could be today’s Chinese data pointing to shrinking factory gate inflation.

Wall Street continued to cheer the prospect of a split US Congress, as Republicans – who are considered more pro-business than Democrats – are likely to oppose any proposals including corporate tax hikes and tighter regulation. A further retreat in inflation tomorrow could encourage some more stock buying as the prospect of slower Fed hikes is a pleasant development, especially for high-growth firms that are mainly valued by discounting expected cash flows for the months and years ahead. Nonetheless, the gloomy outlook for global growth does not allow interpreting the latest recovery as anything more than a corrective move within the broader prevailing downtrend.

Gold, although traditionally considered a safe haven, cheered the likelihood of political stalemate in the US as well. Higher borrowing costs increase the opportunity cost of holding the precious metal and thus anything pointing to slower hikes and thereby lower yields adds allure to the non-yielding asset.

Despite the dollar extending its drop, oil prices fell more than 3.5% yesterday and continued to slide today. This may have been due to the worsening COVID outbreaks in China adding to concerns about fuel demand.