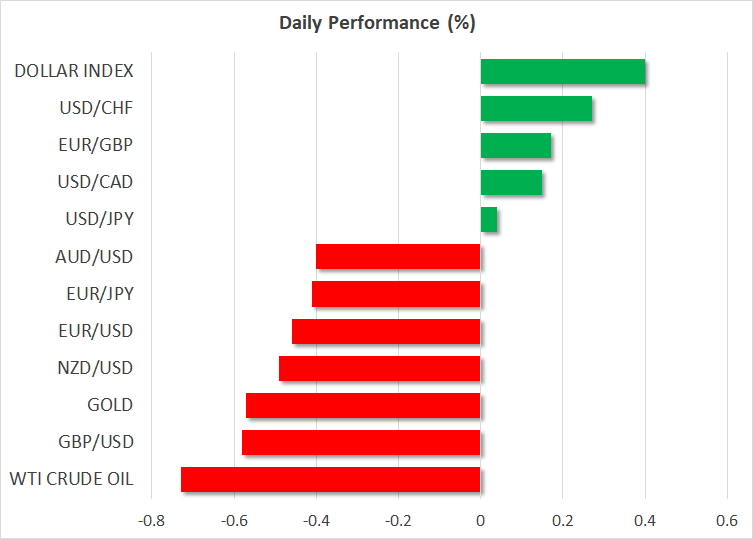 The US dollar continued to slide against every other major currency on Monday, still feeling the heat of a rising unemployment rate and remarks by four Fed officials who said that they would consider a smaller rate hike at their next gathering.

That said, the greenback found a steadier footing today, recouping a small portion of its Monday losses. With its traders probably locking their gaze on the US midterm elections, the currency may continue trading in a quiet fashion, at least until early results start to come out.

Forecasters and opinion polls point to a strong likelihood of the Republicans claiming a House majority, which could become clear during the Asian session Wednesday, while the Senate fight is projected to be a close call and possibly take longer to be resolved. That said, with key states already warning they may need days to count all their votes, experts say that there is the likelihood of not knowing any outcome on Wednesday either.

Political gridlock to weigh on dollar

A split or Republican-controlled Congress means that it would be difficult to get any fiscal stimulus plans through, potentially leading to slower growth and maybe softer inflation. Therefore, this may add credence to bets of slower rate increases by the Fed from here onwards, and thereby prompt traders to sell some more dollars.

With the dollar-long trade appearing to be overcrowded, there is a good chance for investors to keep locking profits, and thereby allow a deeper correction. Nonetheless, a discussion about a bearish trend reversal remains premature. After all, several other major central banks have also signaled a slower rate path hereafter, which likely keeps the Fed in first place in terms of hawkishness. On top of that, global growth concerns remain on the table and a new geopolitical flare up could revive the dollar’s safe-haven allure. So, although another prolonged and steep rally seems unlikely, another round of buying cannot be ruled out, even at a much slower clip.

Equity investors continued celebrating the prospect of a less aggressive Fed, with Wall Street’s main indices adding on average another 1% each. Meta Platforms was a big contributor, gaining more than 6% on reports that the tech-giant is considering large-scale layoffs this week.

Hopes of China ditching its strict COVID policies may have been another reason for market participants to add to their risk exposure. Although health officials reiterated their commitment to the restrictions over the weekend, yesterday reports suggested that Chinese leaders are still leaning toward a gradual exit but warned over a slower process with no specific timeline.

Similarly to the US dollar, the next driver for equities may be the midterms, if we indeed get a taste of the result before the US CPI data is out on Thursday. Any form of gridlock over the next couple of years would probably make it very difficult for any corporate tax hikes to be approved, which combined with bets of a slower rate path by the Fed henceforth may allow for some more buying. Nonetheless, a further recovery could still be seen as a counter move within the broader prevailing downtrend given that renewed global growth fears or an unexpected acceleration in inflation could well initiate the next bearish impulsive wave.