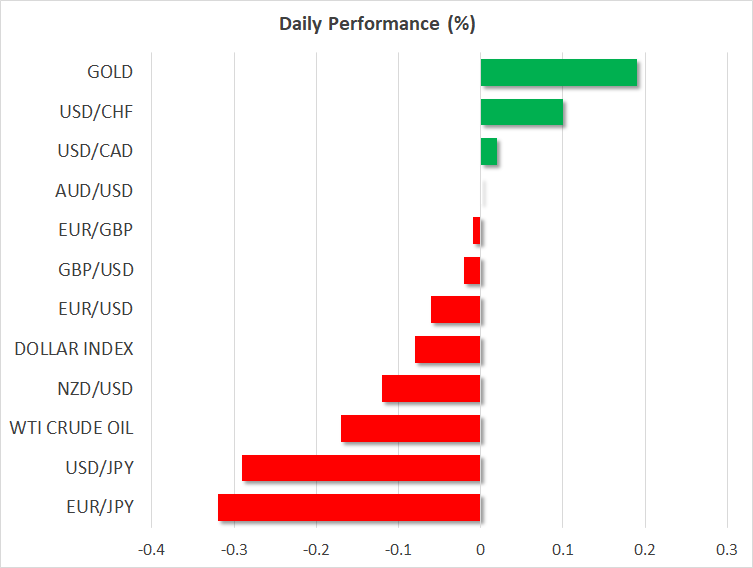 Global markets breathed a sigh of relief on Thursday as risk appetite returned to some degree, but it was not meant to last, with the meltdown in equities resuming today on the heels of a barrage of earnings by the world’s leading tech firms. Apple, Amazon, and Facebook all reported blockbuster top and bottom lines that blew consensus expectations out of the water, and yet, their shares crumbled in after-hours trading.

This is the main element that is dragging all of Wall Street down today as there hasn’t been any other noteworthy news, with futures suggesting a 1.5% loss for the S&P 500 at the open, more than wiping out yesterday’s 1.2% rebound. Given their enormous market capitalization, these tech titans have a tremendous weight in indices like the S&P, so they can drag the entire market down if they sell off.

Frankly, that the world’s biggest companies can report blowout earnings and still crash is a massive red flag for what lies ahead, as it implies that an incredible amount of optimism has already been priced in. Microsoft reported earlier this week and met the exact same fate.

In the bigger picture, this softness may also reflect some deleveraging by big players ahead of the weekend, as the overall environment is quite unstable with virus numbers soaring and the US election looming, making some liquidation of ‘risk’ quite prudent. Indeed, many investors may also prefer to raise cash and sit on some ‘dry powder’ for now, to capitalize on any bargains that arise from the election.

The currency market is a different story though, with the dollar climbing alongside stocks yesterday, and barely rising today even as equities crumble, which is a strange divergence. The greenback is usually a mirror opposite of the stock market nowadays, because of its safe-haven qualities.

This divergence may come down to the euro being exceptionally weak. The single currency fell across the board yesterday, helping to prop up the dollar, after the ECB sent the clearest signals ever that more stimulus is coming. President Lagarde offered a downbeat assessment of the virus-stricken economy and stated that the ECB “will” recalibrate its instruments in December, something that was unanimously agreed.

This argues for limited upside in euro/dollar going forward, though admittedly, the pair could still shoot higher next week on a landslide Biden election victory as speculation for king-sized US stimulus packages ramps up. With the same logic though, the pair could also sink lower on a contested election. In other words, the US election is far more important than the ECB for euro/dollar’s fortunes over the next few days.

The highlights today are the Eurozone’s preliminary inflation stats for October and third-quarter GDP. The spotlight will be on inflation, as the GDP print may already be considered outdated given how dramatically infections have surged in Q4. The bloc’s core inflation rate hit a record low in September and any more weakness today could fuel expectations for the ECB to come out with a bazooka at its next meeting, instead of a toy gun.

In energy markets, crude oil remains under tremendous pressure as the lockdowns in Europe suppress the demand side of the equation and the increasing production in Libya and elsewhere dampen the supply side.

Finally, the last batch of US election polls should be dripping in. Biden has a much bigger lead than Clinton did against Trump at this point, both nationwide and in most battleground states, even if the gap has narrowed lately. Election polls were spectacularly wrong in 2016, but pollsters have since changed their methodology to adjust for that error, so they may prove more accurate this time. 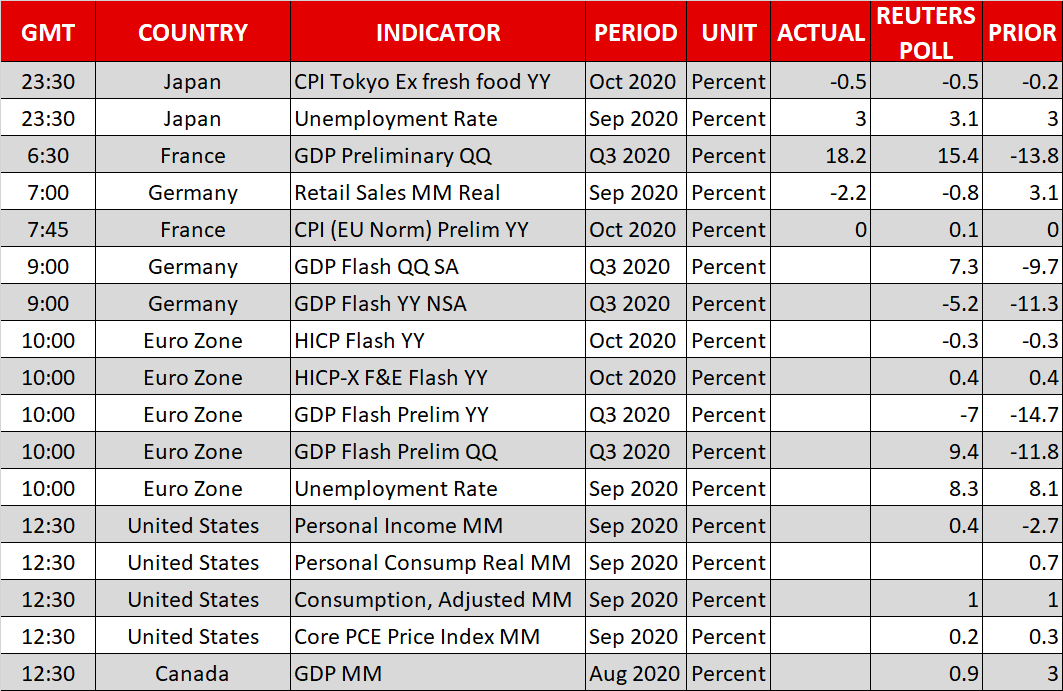