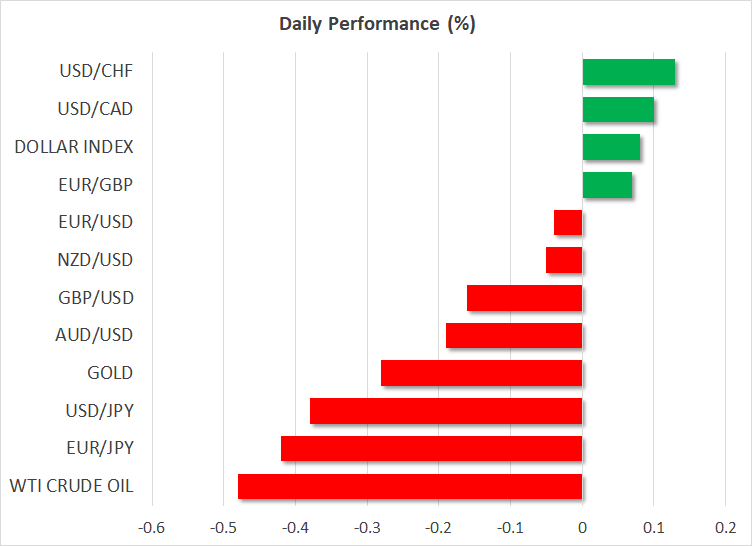 The European Central Bank meeting is undoubtedly the focal point for investors on Thursday in what could turn out to be the most important policy shift since Draghi’s ‘whatever it takes' moment. After years of quantitative easing and negative interest rates, the ECB is almost certain to announce an end to ultra-accommodative monetary policy. Policymakers will probably wrap up all asset purchases by early July and pave the way for the first rate hike in over a decade later that month.

This would allow the ECB to stick to its previously communicated sequencing even if it does involve a little cheating when it comes to how President Lagarde is interpreting her much-prized forward guidance. Nevertheless, she has been successful in the run up to today’s meeting in aligning market expectations with the ECB’s messaging, which itself was quite a task to converge all the views of the Governing Council.

But the latter point may yet pose a problem for Lagarde as there is some uncertainty about how fast the ECB will move in normalizing policy. Hawkish council members are pushing for a 50-basis-point increase in the deposit rate in July. If Lagarde fails to provide clarity on the size of the hike, it would suggest policymakers are struggling to reach agreement and would leave the door open to a steep rise in borrowing costs over the summer.

Another question mark is whether the ECB will introduce a new policy tool aimed at preventing unwarranted spikes in periphery bond yields now that QE is drawing to an end. Although it’s worth pointing out that the jump in German bund yields has been more pronounced lately, with the 10-year yield hitting eight-year highs today.

This is keeping the euro supported in the $1.07 region. The meeting will likely determine whether the single currency breaks above or below its recent tight range against the US dollar.

Anticipation of ECB action is also building up in equity markets where nerves are heightened amid growing concerns of economic slowdown and fears that central banks may have to get even more aggressive to rein in inflation. The ECB’s decision will be followed by those from the Fed, Bank of England, Swiss National Bank and Bank of Japan next week and investors have to additionally get through tomorrow’s CPI report out of the United States.

Hopes of inflationary pressures fading soon have been dampened after oil prices climbed to fresh highs this week. OPEC’s reluctance and inability to significantly boost output, China’s loosening of virus restrictions and the European Union’s oil embargo on Russian crude have all contributed to the recent tightening of the oil market, and that’s not likely to change anytime soon.

Aside from energy stocks, it’s not looking too good at the moment on the earnings front and it’s only a matter of time before higher rates and inflation begin to dent consumer demand, hurting margins even more. The latest rebound in Treasury yields is also not helping sentiment as the 10-year yield is now back above 3%.

The S&P 500 ended Wednesday down by 1.1% and the Nasdaq Composite closed 0.7% lower. Futures started the day lower but are edging up now.

European and Asian shares are mostly down, with worries about China once again weighing on the market. A district in Shanghai has been placed under lockdown to allow for mass testing, sparking fears of wider shutdowns being re-imposed. However, there was positive news on the economy after data showed exports from China picked up pace in May following the lifting of many restrictions.

The slight risk-off tone might be aiding the safe-haven Japanese yen to halt its endless slide. The dollar brushed a fresh two-decade high of 134.55 yen overnight but has since pulled back to around 133.50 yen. This could just be a case of the yen selloff pausing for breath but it could also mean traders might be wary of pushing the currency too low in case it prompts some kind of intervention by Japanese policymakers.

The yen edged up against its other peers too while the dollar was broadly flat, staying confined to its week-long range and awaiting some direction from Friday’s inflation data.

The pound and aussie both slipped versus the greenback but the New Zealand dollar was a surprise outperformer on Thursday after being on the backfoot for much of the week.

The Reserve Bank of New Zealand outlined its plans today that it will begin selling New Zealand government bonds with the aim of reducing its holdings to zero. The pace of reduction has been set at NZ$5 billion a year. New Zealand yields shot up after the announcement, pushing the 10-year yield back up to the May peak, lifting the kiwi in the process.