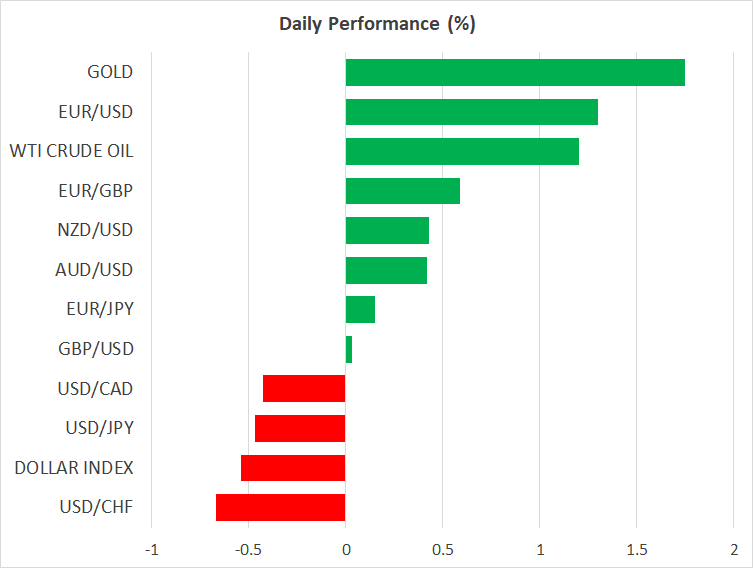 Cheery start to 2021 as markets pin hopes on vaccines

The first trading day of the new year began pretty much how 2020 ended as investors chose to shrug off the worrying virus headlines to instead focus on the vaccine rollouts and the prospect of more stimulus. The US dollar skidded against its main rivals as traders expect real yields in the United States to continue to be pressured in 2021 amid the Federal Reserve’s new-found tolerance of higher inflation and commitment to maintaining large asset purchases for the foreseeable future.

Equally, the abundance of government and central bank stimulus coupled with the gradual rollout of Covid-19 vaccines around the world is propping up equity markets and that trend looks set to continue for at least the early part of 2021. European shares opened about 1% higher after a strong session in Asia, and US stock futures were also pointing to solid gains for Wall street today.

The one exception was Japan’s Nikkei 225 index, which closed 0.7% lower on speculation that a state of emergency will be declared in Tokyo amid a spike in coronavirus cases. Infections have been on the rise in many other countries as well in recent weeks, particularly in the United Kingdom, with large swathes of the world’s population having spent Christmas under lockdown or tight restrictions.

Nervousness about mass vaccination programmes going according to plan and whether even more stringent controls will need to be enforced before infections begin to ease is providing some support to safe havens, excluding the dollar. Both the yen and the Swiss franc were mixed on Monday, while gold surged by 1.8% to smash above the $1,900/oz level to its highest in nearly two months.

However, the unstoppable virus surge is not all investors need to worry about as there may be more election drama about to come out of Washington in the next few days. The runoffs for two Senate seats in Georgia take place on Tuesday. The votes will decide whether Republicans get to keep their majority in the Senate or if Democrats will secure control over both houses of Congress. Polls suggest the two races are tight, but whatever the outcome, there will not be a clear win for the markets as, aside from the fact that both scenarios have their pros and cons, the slim majority will make it difficult for either party to always have its way.

More trouble could be brewing on Wednesday when Congress will vote to certify Joe Biden’s Electoral College victory. This is usually nothing more than a formality, however, that may not be the case this time round. Several House and Senate Republicans are planning to vote against the certification unless there is a 10-day emergency audit of the presidential election results in disputed states such as Pennsylvania, Nevada, Georgia and Wisconsin.

Their bid is unlikely to be backed by the majority of Senators and Representatives but nevertheless highlights the bitter divisions on Capitol Hill.

Holiday lull over as busy agenda ahead

If US politics fails to ruffle any feathers, the Fed might as the minutes of the December policy meeting are due on Wednesday and several officials will hit the podium this week, offering their first views of 2021.

Traders will also be keeping an eye on Friday’s nonfarm payrolls report but before that, a meeting of OPEC+ countries will be watched today. Oil prices were last up about 2% on expectations that the major producers will decide to maintain output for the next month at January levels as the surge in virus cases and ensuing restrictions have dented demand for fuel.

Elsewhere in the markets, the euro recouped all of Thursday’s losses and was once again eyeing the $1.23 level. The pound held firm near $1.3675, while the commodity-linked aussie, kiwi and loonie were all up about 0.4%. 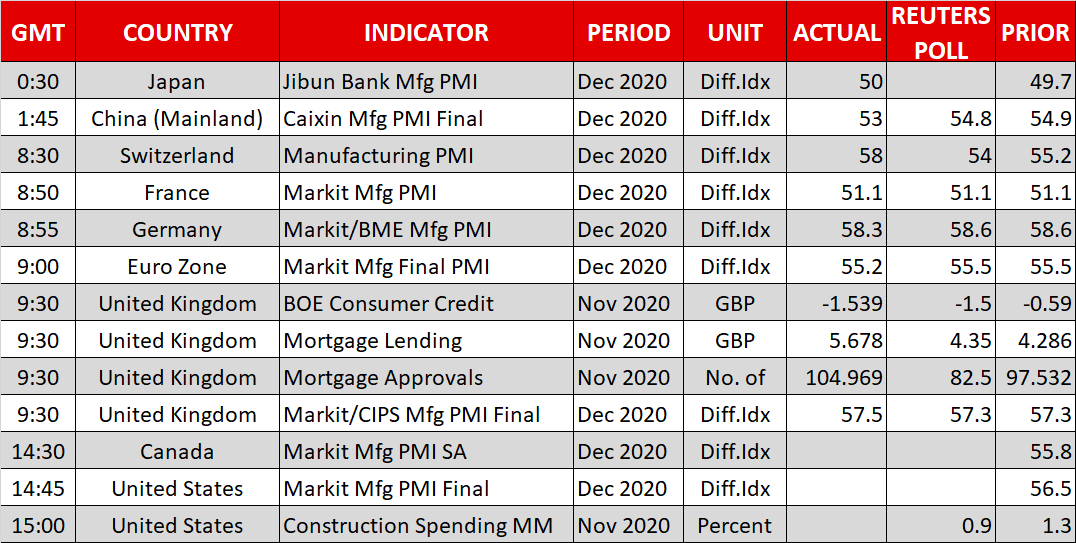