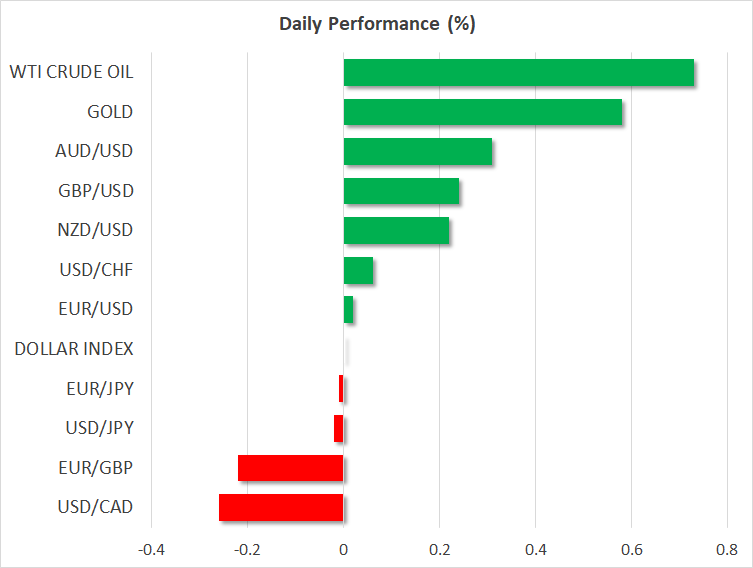 Fed remarks about a potential scaling back of the QE program eclipsed everything else in a rather quiet session on Monday, pushing US Treasury yields higher and helping the dollar stay above water. First it was the Fed’s Bostic, who said the central bank is not locked into a paradigm and could change its stance if the economy recovers faster.

Then Kaplan reinforced this message, saying that hopefully enough progress will be made this year in the recovery to begin discussions about a QE taper. All this comes on top of comments by Vice Chairman Clarida lately hinting that tapering could begin in early 2022 if all goes smoothly.

While it is natural for policymakers to discuss the conditions for normalization, the frequency of the latest remarks makes one wonder if this is an orchestrated FOMC attempt to manage market expectations around tapering. With the Democrats promising a new round of relief in the ‘trillions of dollars’ once Biden is sworn in, investors and policymakers alike seem to be positioning for a new phase of booming US growth.

The bond market is enthusiastically dancing to this tune, with the yield on 10-year Treasuries surpassing 1.15% today for the first time since March, giving the dollar some of its old interest rate advantage back.

Aside from the Fed signals, there wasn’t much else in the news. Wall Street suffered a rare retreat from record highs, with social media giants leading the pullback. Twitter (-6.4%) was in the eye of the storm after it permanently banned President Trump from its platform, sparking concerns of a hit on revenue and backlash from regulators.

That said, there was no sense of panic selling anywhere and the retreat was ‘orderly’ overall, with investors likely taking some chips off the table after such a monster bull run. Futures point to a slightly higher open on Wall Street today.

The main event for markets this week will likely be the details of president-elect Biden’s stimulus proposal, which will be unveiled Thursday. The more relief he promises, the better the US growth outlook. For instance, a package worth $3 trillion – as has been suggested by some reports – would likely reignite the ‘growth trade’, whereas something closer to $1 trillion may even come as a minor disappointment.

Leaks around the size and scope of the new relief package could hit the markets before Thursday.

In the broader FX market, there is a feeling of cautious optimism early on Tuesday. Defensive proxies like the dollar and yen are slightly weaker, while risk-linked currencies like the aussie and kiwi are a touch higher.

The British pound is having a good day too, after BoE Governor Bailey poured cold water on negative rates. The gains may also reflect the fact that the UK is among the leaders in the global vaccination race so far. This doesn’t mean the UK has done a stellar job with the vaccine rollout, but rather that it has done the least-bad job among the major economies. The European rollout has been abysmal, and while the American one is better, it is far from impressive.

Finally, there’s a ton of Fed-speak today, including the Fed’s Brainard (14:30 GMT), Mester (17:00 GMT), and George (18:00 GMT). Brainard is the most important, and if she echoes Bostic and Kaplan in being open to tapering, that could give the dollar another shot in the arm.