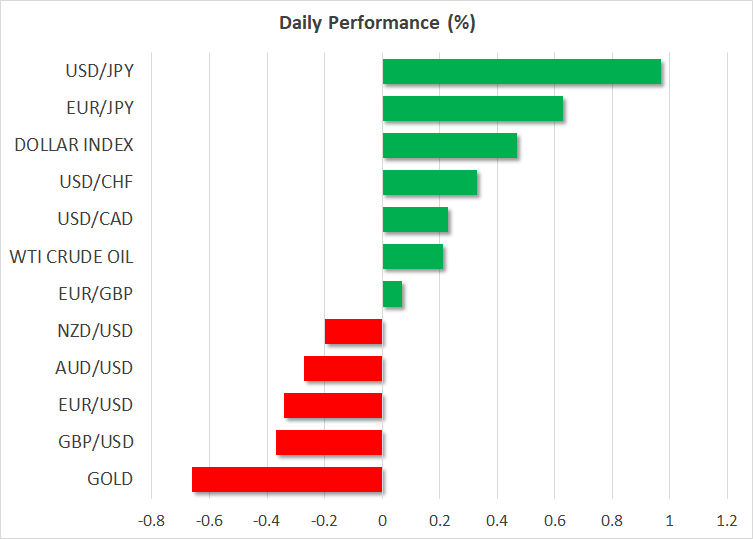 The US dollar got off to a steadier start on Monday and stocks were mixed after a top Fed official played down the significance of last week’s softer-than-expected CPI report in overnight comments. Speaking at an economic event in Australia, Governor Christopher Waller said the endpoint for interest rates is still “a ways off” and that October’s inflation drop was just “one data point”.

Waller did however open the door to a slower pace of rate increases, something also endorsed by Boston Fed chief Susan Collins, who was somewhat less hawkish in comparison when she spoke on Friday.

For the markets, this intransigent stance by the Fed to keep hiking rates, albeit at a more moderate pace, until there are clear signs that inflation is headed south has been another party spoiler, but not necessarily a deal breaker for the optimists. Investors are either more confident than the Fed is that inflation will soon fall off a cliff, or the tightening in financial conditions has not gone far enough, as equity markets have retained a good degree of positive momentum after Waller’s remarks.

As for the US dollar, the growing formation of bearish patterns is getting harder to ignore even as the outlook for the American economy remains less gloomy than for much of the rest of the world. The dollar index plummeted to almost 3-month lows on Friday, in what was its worst week in two-and-a-half years. But the renewed caution over Fed policy is helping it recoup some of those losses on Monday, while Treasury yields are also edging higher.

The 10-year yield has fallen back below 4%, although the yield curve remains deeply inverted.

The pound – one of last week’s biggest winners – was under pressure on Monday, falling back below $1.18, amid worries that UK finance minister Jeremy Hunt will announce an austerity budget on Thursday, increasing the risk of a steep recession.

But the worst performer was the Japanese yen, which slid about 1% as Bank of Japan Governor Kuroda reiterated the need for monetary easing even though he sounded more upbeat about wages picking up next year.

Stock rally may just be on pause

There was not as much caution in equity markets, however, as the prevailing mood was one of optimism. Asian markets ended mixed, while European shares were extending their gains.

On Wall Street, far from reversing the two-day rally that added 6.5% to the S&P 500 and more than 9% to the Nasdaq Composite, e-mini futures were last trading between 0.3% and 0.5% lower.

China announced a 16-point rescue plan for its embattled real estate sector on Sunday in a bid to shore up struggling developers as well as to boost property sales. The measures follow last week’s shift in Covid quarantine rules, which raised hopes that other restrictions may soon also be relaxed.

Nevertheless, gains in Chinese stocks were somewhat contained as the end of zero Covid may be months away and in the meantime, Covid cases continue to rise in Beijing and other major hubs.

Commodities take a step back, cryptos in surprise bounce

This weighed on the demand outlook for some commodities, particularly for oil, sending prices lower on Monday. Oil traders are still wary about the growth risks for next year as recession seems more and more likely in Europe and America, while China’s zero-Covid shift is far from certain.

Gold prices were also lower, pulling back from three-month highs, having surged by more than 8% in November. Today’s drop is likely being driven by the firmer dollar and the thawing of relations between the US and China after their leaders held their first face-to-face meeting at the G20 summit in Indonesia.

However, should the dollar resume its downtrend, gold stands a good chance of reclaiming the $1,800/oz level.

In digital currencies, Bitcoin and other altcoins bounced off their lows plumbed at the start of the session following days of heavy selling. Crypto markets were plunged into turmoil after a major exchange – FTX – collapsed. Reports over the weekend that the platform has been hacked, with $600 million disappearing from FTX wallets have only worsened the crisis, making today’s rebound all the more surprising. But the volatility is far from over and there’s likely to be more turbulence on the way.