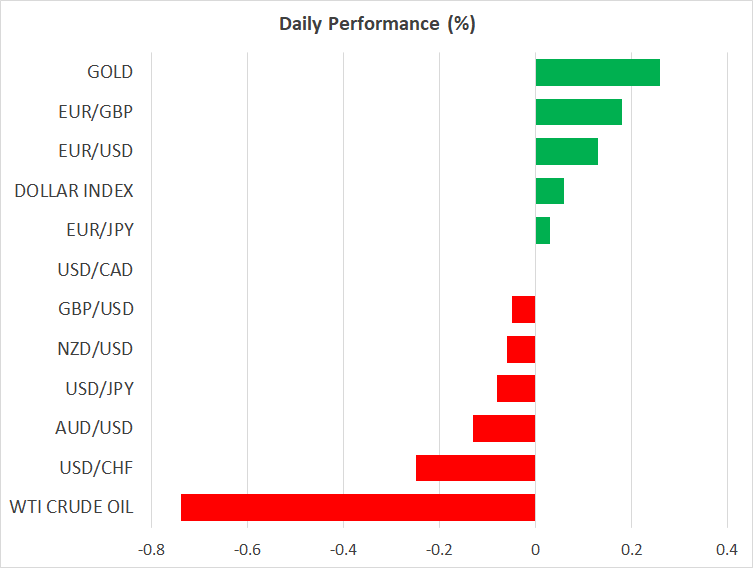 Dollar back in the ring to take another swing

The Federal Reserve injected a dose of volatility into financial markets on Wednesday, after the minutes of the latest policy meeting revealed that policymakers are not in a rush to strengthen their forward guidance. The Committee seemed to agree that it should provide "greater clarity” about how long interest rates will stay low, but only “at some point”, which the market interpreted as reducing the odds of an imminent shift in September.

What’s more, policymakers gently closed the door on yield curve control. They highlighted the drawbacks of this policy, such as the meagre benefits it would provide in an environment where yields are extremely low already, the risk the Fed might have to buy absurd amounts of Treasuries if yields spike, and a difficult exit strategy.

The key takeaway was that the Fed is still concerned about the economy, but it is not in a rush to alter its forward guidance and the bar for setting caps on US yields is pretty high. This message was less dovish than the market was primed for, sending the beaten-down US dollar higher and pushing stock markets lower, along with gold prices.

Dead cat bounce for dollar, or not?

Strikingly, the dollar started to climb even before the minutes were released, which likely reflects some short covering by traders ahead of the event. The burning question now is whether this marks the beginning of a sustainable recovery for the reserve currency, or whether it was just a modest rebound in the broader downtrend.

In light of the reversing trend in European/American infections, coupled with signs that the US virus resurgence didn’t significantly hurt the economic recovery and that the Fed won’t be ultra-aggressive, this pullback in euro/dollar may still have room to run. The fact that speculative positioning on the euro is at record bullish levels argues in the same direction – it wouldn’t take much for a ‘long squeeze’.

In general, the narrative that Europe will ‘out recover’ the US is slowly coming under question, and a confirmation in the Eurozone’s PMIs tomorrow that the bloc’s recovery is losing steam might serve as a wake-up call for the market.

Franc and pound under fire

The greenback’s revival put pressure on every G10 currency, but most of all on the defensive Swiss franc, which collapsed even despite the souring mood in equity markets. There was no news to justify this weakness, so it seems the Swiss National Bank might have stepped up its FX interventions to strike the franc down after the currency briefly touched a five-year high against the dollar.

But otherwise, there wasn’t much else. The pound was another underperformer, likely because of its high correlation to risk appetite. Brexit talks continue in Brussels.

Not much going on today – watch Congress

As for today, the calendar is pretty low key. The ECB releases the minutes of its latest policy meeting at 11:30 GMT, though this is usually not a market mover. In the US, the weekly jobless claims will tell us how the labor market’s recovery is progressing.

Beyond that, all eyes remain on Congress. The near-term fortunes of the stock market may depend on whether lawmakers can hammer out a stimulus deal soon, before the election season fires up and complicates matters.