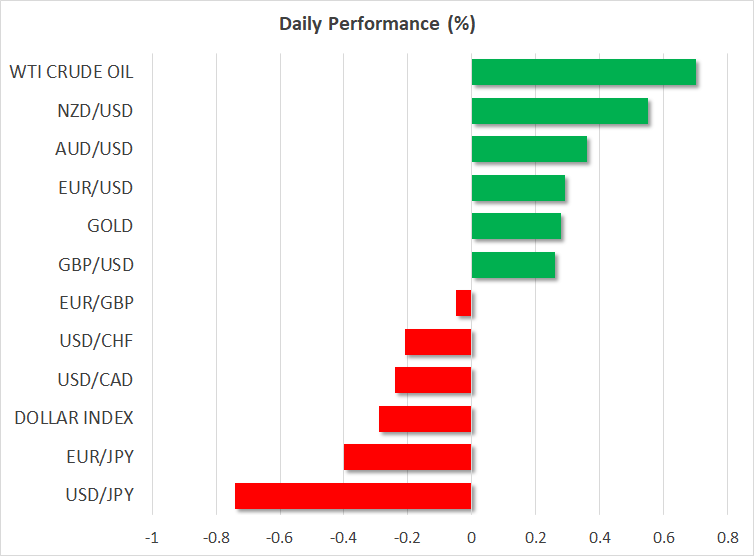 Will the Fed confirm hopes of slower tightening?

The dollar traded mixed against the other major currencies on Tuesday but came under some broad-based selling today, with investors hoping that Fed Chair Powell and his colleagues will hint at slower rate increases when they announce their monetary policy decision later today.

The market is in full agreement that the Committee will deliver its fourth consecutive 75bps hike, but it is evenly split on whether the December move will be of 50 or 75 basis points. The whole aggressive Fed narrative came into question a couple of weeks ago when reports suggested a slowdown in rate increases from December onwards, while a bunch of weak data and slowdown signals by other major central banks thereafter added credence to the newborn dogma.

With the details of the advance US GDP report for Q3 also painting a blurry picture, despite the sparkly overall growth rate, Powell and his colleagues may corroborate the narrative of slower future hikes due to growing economic risks. However, they may try to pass the message in a way that prevents substantial loosening of financial conditions.

Ergo, given that market participants lifted their terminal rate to slightly above 5% again yesterday after the upside surprise in US JOLTS job openings for September and that they are still seeing rates higher than the Fed does in December next year, such an outcome could result in some more dollar selling as there is no more Fed hawkishness to be priced in. However, a potential retreat in the dollar may not be suggestive of a trend reversal genesis if Powell avoids sounding very dovish. After all, with other major central banks also hinting at slower rate increases, the Fed could hold onto first place in the hawkishness league.

The currency that is gaining the most ground against the greenback today is the Japanese yen and that’s maybe due to BoJ Governor Kuroda saying that adjusting their yield curve control policy could be considered as an option in the future, but not now. Combined with a weakening dollar, such remarks could allow dollar/yen to correct even lower, but with the Fed staying in tightening course and the BoJ keeping long-dated bonds around zero, a trend-reversal discussion looks premature.

Wall Street in the red after JOLTS, but December Fed bets stay unaffected

European equities kicked off November on a positive note due to speculation that the Fed will reduce the pace of its future rate increments, but also due to an unverified source claiming that China is planning on easing its zero-COVID policy in March.

Nonetheless, the joyful mood did not spread to the US session, as all three of Wall Street’s main indices came under selling pressure and closed in the red due to the unexpected increase in job openings. This suggested that demand for labor remains strong, disappointing a few of those hoping for a softer language by the Fed later today. That’s maybe why investors reconsidered a terminal rate of above 5%. However, bets with regards to today and December’s meetings were barely changed, allowing investors to continue adding to their risk exposure during Asian trading today.

A Fed appearing less aggressive, an earnings season not as bad as feared, and slowdown hints from other major central banks, constitute a blend of developments that may add some further fuel to the latest risk rally. Still, it does not imply a reversal and new record highs as chances of a global recession remain top of investors' concerns.

The increased risk appetite allowed oil prices to gain as well and to recoup Monday’s losses as the rumors regarding China eased demand concerns that were raised by strict COVID policies in the world’s second largest economy. However, similarly to equities, fears of a worldwide recession could keep a lid on crude prices for now.