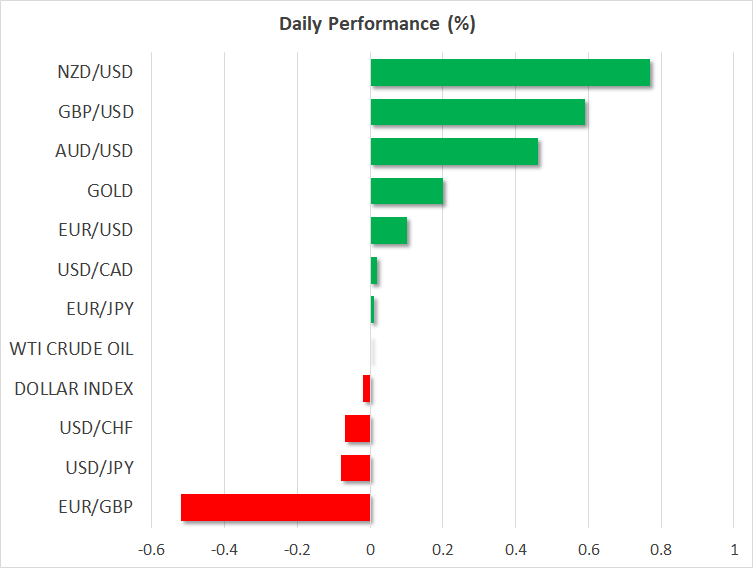 The bombardment of hawkish talk from Fed officials continued to set the tone on Friday, as the week ends on a somewhat more sombre tone than from how it started. Hopes that slowing inflation will allow the Fed to call time on its rate hike cycle have all but disappeared as policymakers have once again stepped in to quell any such speculation.

Although it’s looking increasingly likely that inflation in the United States is now on a downward course, the Fed clearly isn’t ready yet to take any chances by easing up on its tightening stance. Every time a piece of good news on the inflation front leads to some loosening of financial conditions, the Fed sees no choice but to rein in the optimism, as was the case last week when stocks rallied and yields slumped after the soft CPI report.

But the most dramatic intervention came on Thursday when St. Louis Fed President James Bullard suggested that rates may need to go as high as 7% in the worst case scenario, with a 5-5.25% target range being the minimum level required to combat high inflation.

Wednesday’s much stronger-than-expected retail sales numbers and yesterday’s solid jobless claims reading support the Fed’s argument that the economy has not cooled enough to take its foot off the brake. Yet, markets seem to think otherwise.

Equities perk up again as S&P 500 fights back

Investors are either seeing something the Fed isn’t on the economy, whether it’s signs that inflation is about to fall off a cliff or that the red-hot jobs market is about to unravel, or monetary tightening quite simply hasn’t gone far enough.

The hawkish soundbites have managed to halt the slide in Treasury yields, which have recovered slightly, but the 10-year yield remains well below where it was before the CPI data.

Equity markets on the other hand have only suffered a minor bruising and Wall Street futures are climbing today. The S&P 500 quickly began to reverse higher yesterday after a gap lower at the open as the mood improved after both Cisco Systems and Macy’s upped their profit forecasts. But although it still ended in the red, it stands a good chance of erasing this week’s losses today, with European shares leading the advances.

There was no single driver for the positive mood in Europe on Friday. Growing expectations that the European Central Bank will hike rates by only 50 basis points in December instead of 75 might be helping, but there is also some caution as European banks have to repay about 500 billion euros in TLTRO loans.

The euro was slightly firmer on Friday but generally lacking direction. The pound, however, is on a surer path to end the week with decent gains as it climbs back above $1.19. A downbeat assessment of the UK economy by Chancellor Jeremy Hunt briefly pushed sterling below $1.18 yesterday as he presented his Autumn budget statement.

The budget was a mixed bag, offering somewhat more relief than expected to low-income earners, with the bulk of the spending cuts pushed back until after the next general election. But the tax burden overall is set to hit the highest since World War Two and there’s little coming from the government in terms of how it plans to boost growth.

However, with investors not having to worry about another bond market episode for the UK and retail sales surprising to the upside today, the pound is back on the front foot for now.

No CPI boost for the yen

The yen bucked the trend against the US dollar and is headed for marginal weekly losses even as inflation in Japan has started to simmer. The core consumer price index, which excludes fresh food prices, rose 3.6% in October from a year ago, accelerating from 3.0% in September.

This was the highest rate in 40 years, though potentially inconsequential for the Bank of Japan, which believes inflation will start to come down next year. With Governor Kuroda again signalling today that a major policy shift is unlikely until wages are rising sustainably, the yen is in danger of weakening past the 140 level again.

As for the greenback, it’s still looking a bit vulnerable even though the hawkish Fed talk has stabilised it for now. Nevertheless, the dollar index might just finish the week with small gains thanks to the weaker yen and Swiss franc.