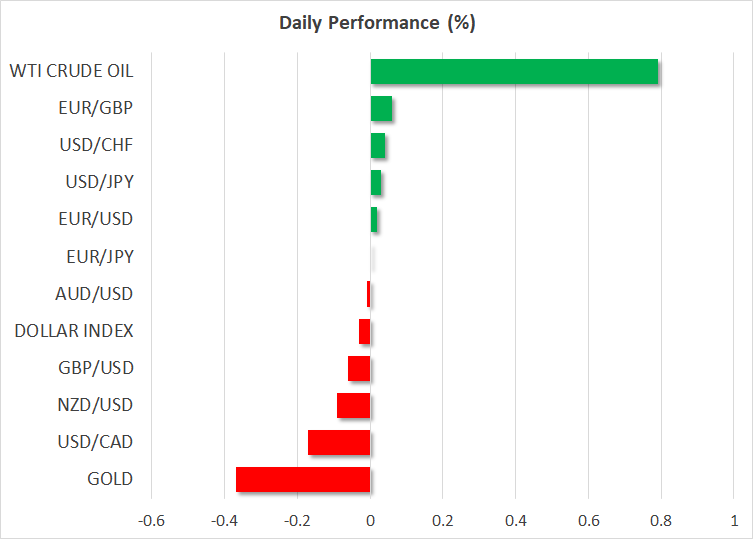 Powell gets serious about taming inflation

The Fed took another significant step towards policy normalization this week, as Jerome Powell repeated the message of his colleagues, flagging higher interest rates and a smaller balance sheet in his confirmation hearing on Capitol Hill for a second term as Fed Chair. With a growing number of Fed officials voicing support for not only an earlier rate hike but also for the balance sheet reduction to start sooner rather than later, Powell seemed to be on board with quantitative tightening.

Confident about the recovery even as the Omicron wave continues to cause widespread disruption to businesses and supply chains, Powell said the economy “no longer needs highly accommodative policy”, warning that there is a risk that high inflation becomes entrenched.

With the Fed now firmly focused on getting inflation back under control, the market pricing of at least three rate hikes this year no longer seems so far-fetched. However, this is already what money markets were signalling before Powell’s testimony on Tuesday so the fact that a fourth rate hike is not fully baked in after his remarks suggests that not much has changed as far as the markets are concerned.

Crucially, investors were reassured by Powell’s prediction that inflation will likely peak in the middle of this year and are therefore betting that the Fed won’t have to hike rates much more aggressively than what’s currently being projected. Powell also avoided giving precise timings for liftoff and the start of the balance sheet runoff and markets may have taken this as a sign that he’s not in as much of a hurry as some of his more hawkish fellow policymakers.

This seems to have set the tone for equity markets as shares on Wall Street extended their remarkable rebound after Monday’s dramatic whipsaw that saw the Nasdaq briefly entering correction territory. The Nasdaq Composite ended Tuesday’s session up by 1.4%, while the S&P 500 finished 0.9% higher.

Asian and European shares were a sea of green on Wednesday, though US e-mini futures were pointing to some weakness. Sentiment is being additionally propped up by optimism about the upcoming earnings season as well as softer-than-expected CPI numbers out of China earlier today, which have boosted expectations of further monetary easing by the PBOC.

Yields steady ahead of all-important US CPI

Ultimately though, it is the calm in bond markets that has equities rejoicing as Treasury yields did not spike after Powell’s hearing and the rally in global yields appears to have paused as well.

Whether that calm holds or not will likely depend on today’s inflation report out of the United States. The headline CPI rate is expected to reach 7.0% y/y in December. An even bigger increase could roil markets once again.

Ahead of the inflation data, the US dollar was trading flat against a basket of currencies. The greenback took a tumble on Tuesday as most traders were anticipating Powell to be even more hawkish. However, it’s been a much steadier start for FX markets on Wednesday, with most majors more or less unchanged against their US counterpart.

The Canadian dollar is the exception as the recent strong gains in oil prices are bolstering the loonie, which is trading near two-month highs versus the greenback. The euro, meanwhile, is approaching the upper band of its sideways range, seen at $1.1385, and the pound is holding above $1.36, brushing off the brewing political storm for Boris Johnson, who is coming under increasing pressure from his own party following a series of scandals.