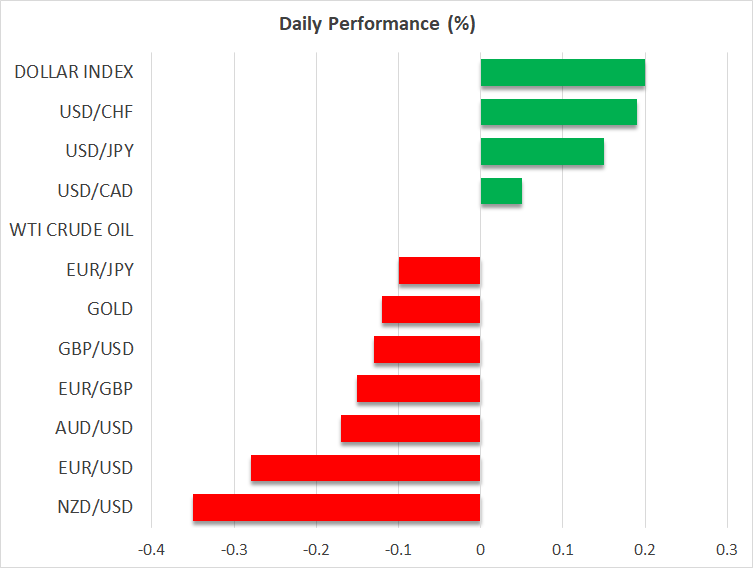 Wall Street falters but party not over

Equity markets were feeling somewhat less joyous on Wednesday after the S&P 500 failed in its bid to close above the 4,800 level for the first time and as Chinese tech stocks came under renewed selling pressure.

The S&P 500 ended the day 0.1% lower, while the Nasdaq Composite slid 0.6%. Only the Dow Jones Industrial Average managed to stretch its gains onto a fifth day, coming just shy of its all time high from November. With three more trading days to go before 2021 draws to a close, there’s hope yet for the Santa Claus rally to resume and lift Wall Street to unchartered territory.

Optimism about the US growth outlook and diminishing fears that the rapid spread of the Omicron variant will prompt new lockdowns in the major economies are driving this latest upswing. Although daily virus cases are soaring in several countries like America and Britain where Omicron is now the dominant strain, hospitalizations have so far remained below the peaks seen in the Delta wave.

A bigger worry is what impact Omicron will have in Asia once it starts to escalate there as well. Vaccination rates vary greatly across Asia and even those countries with a very high uptake level have yet to get started with booster jabs. Hence, there’s a fair bit of uncertainty hanging over the growth picture in the first few months of 2022.

These jitters, combined with ongoing concerns about China’s regulatory crackdown on its tech sector are weighing slightly on Asian markets today. Shares in Hong Kong, China and South Korea fell the most.

Europe also succumbed to some profit-taking, though London’s FTSE 100 jumped about 1% as it played catchup after a two-day bank holiday. US stock futures were positive too, indicating sentiment is more likely to improve than not during the course of the day.

In the FX arena, the mildly more cautious tone nudged the US dollar slightly higher. The dollar index climbed to a one-week high, mainly on the back of the yen’s slump as other majors have been trading in narrower ranges this week. However, the Japanese currency has been recouping some of its losses in the past 24 hours, particularly against the euro. Though, dollar/yen hit a fresh one-month high today to test the 115 level.

The pound, euro and New Zealand dollar retreated slightly, but the aussie and loonie were flat on the day.

The greenback has been consolidating since late November, with the riskier currencies making only a partial rebound from the Omicron-induced selloff. The steady uptrend in the two-year Treasury yield is probably what’s supporting the dollar because longer-dated yields haven’t really gone anywhere lately.

But the moves in the US Treasury market have on balance been positive for gold, which has been slowly edging higher since mid-December. Nevertheless, the latest attempt to convincingly break above $1,800 didn’t end well, as the precious metal has now pulled back towards this key level after briefly brushing $1,820/oz yesterday.

Oil prices, however, maintained their upward trajectory as investors continued to bet that the Omicron outbreak will have only a limited hit on demand. WTI futures were last trading at $76.10 a barrel, having recovered more than 20% from the early December low.