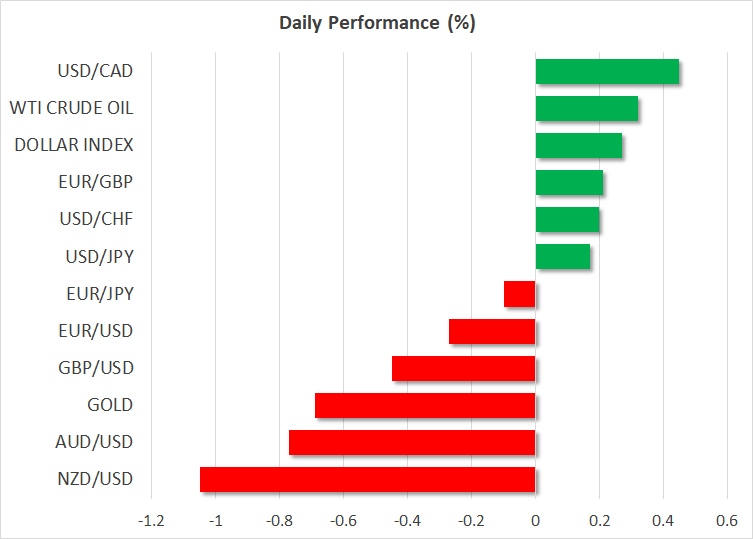 Global equities were back in the red on Wednesday as concerns about sluggish growth and higher inflation returned to haunt investors. The shift towards tighter monetary policy by central banks amid worsening supply shortages around the world and surging commodity prices has dampened the outlook for the major economies at a time when the recovery was already on shaky foundations due to the uncontainable Delta outbreak.

Fears about a new era of stagflation have slowly been building up over the past few months and better-than-expected services PMIs on Tuesday were only able to partially offset these worries. The ISM non-manufacturing PMI in the United States rose unexpectedly in September, while the final readings for the services PMIs in the UK and Europe were revised higher.

The upbeat data along with a rebound in Facebook shares following the platform’s outage helped Wall Street to bounce back from multi-month lows on Tuesday. However, e-mini futures were down around 1% today as rising US yields pressured tech stocks and the ongoing climb in oil prices heightened anxiety about persistently high inflation. Asian and European shares were also lower on Wednesday, with the mood possibly staying downcast until Friday’s US jobs report, which has the potential to lift markets if it’s reasonably solid.

In the meantime, fresh highs in oil futures are keeping investors on edge, pushing up inflation expectations, which are in turn driving government bond yields to multi-month peaks. The yield on 10-year Treasury yields briefly touched 1.57% today for the first time since mid-June as oil prices extended their rally after Monday’s OPEC+ decision when major producers stuck to their production plans and did not signal any intention to accelerate the phase out of supply curbs.

WTI futures started the day above $79 a barrel, crossing the level for the first time in seven years. Brent crude, meanwhile, scaled fresh three-year highs. Though both had eased back from session highs during European trading.

Safe-haven favourites, the Japanese yen and Swiss franc, as well as the US dollar, were firmer across the board on Wednesday. The greenback advanced towards last week’s one-year top against a basket of currencies, weighing heavily on the riskier pound, aussie and kiwi.

Sterling was back below $1.36, and despite an impressive rebound over the past week, concerns that the Bank of England could embark on a policy mistake by raising rates too quickly and that the UK’s acute supply constraints are not about to ease anytime soon cast a shadow over the currency’s near-term outlook.

The euro slipped too, brushing a 14-month low of $1.1551 versus the dollar, after data today showed German industrial orders plunged in August, adding to doubts about the strength of the Eurozone recovery.

Among the commodity currencies, the surge in oil prices somewhat cushioned the oil-linked Canadian dollar, which fell less than its antipodean peers. Surprisingly, it was the kiwi that suffered the heaviest blow even as the Reserve Bank of New Zealand hiked the official cash rate for the first time in seven years.

As expected, the RBNZ lifted rates by 25 basis points and hinted at the “further removal of monetary policy stimulus”. However, given the latest backdrop of ongoing lockdowns in New Zealand and slowing growth elsewhere, investors are becoming less bullish about the prospect of aggressive rate hikes by the RBNZ. The New Zealand dollar might therefore struggle in the coming weeks if the RBNZ is not seen to be tightening at a faster pace than what is already priced in by the markets, at least until the November meeting when updated forecasts will be available and investors will get a better idea about how steep the rate path is likely to be.

View All
XM Research - 16 hours ago