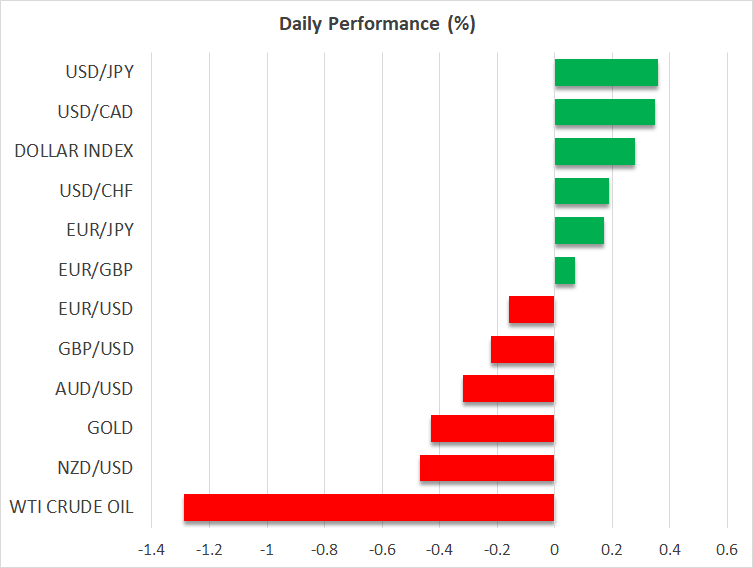 Equities were headed for a red session yesterday before news broke that the Biden administration will try to alleviate the shortage in chips, lighting a fire under semiconductor stocks that ultimately saw the whole market close higher. Soaring consumer demand for electronics during the pandemic coupled with supply limitations has given rise to a global scarcity of chips that has plagued multiple industries, putting executive action on the table.

The S&P 500 closed almost 0.2% higher, refusing to retreat from its record peaks even as the overall 'risk party' started to run out of juice. The same old stimulus and vaccination stories appear well priced in by now, and investors seem to be searching for the next big theme that will drive sentiment. Wall Street futures are slightly negative on Friday, perhaps as traders take some profits and trim their risk exposure ahead of a long US weekend.

Staying in US politics, President Biden apparently warned senators from both parties yesterday that unless America steps up its investment game, China will “eat our lunch”. Admittedly, this might be an ingenious move by Biden to lay the foundations for the second infrastructure bill he promised.

The Democrats are already using the budget reconciliation process for this relief package, which allows them to push the bill through Congress without any Republican support. They probably cannot use the same process again this year, so they will need several Republican senators on board to pass the second investment package. Framing this investment issue from a national security angle could be a brilliant way to secure that support.

All quiet on the FX front, but penny stocks party

It has been a very quiet week in the FX theater. A lack of fresh drivers has kept currency volatility to a minimum, while some traders may also be absorbed by the raging mania in small-cap and penny stocks, which are showing real signs of 'irrational exuberance' lately.

Euro/dollar is on the retreat on Friday after meeting resistance near its 50-day moving average but is set to close the week higher overall. The pair seems to be caught between conflicting narratives. Everyone agrees the European economy is in dire straits and behind in vaccinations, but there's a fiery debate about the dollar side of the equation.

Some think the supermassive spending packages from Congress will turbocharge the US economy, enabling the Fed to normalize rates sooner than everyone else and ultimately boosting the dollar. Others believe the dollar will be a victim of its own stimulus success. If the economy fires up and riskier assets perform well, the reserve currency could crumble as safe-haven plays are decimated.

The truth may be somewhere in the middle. The greenback could stay under some pressure for now, while the US economy is still in trouble and the Fed refuses to entertain the idea of QE tapering. In the coming quarters though, once all the federal spending flows in and the economy fires up, the dollar could realign with US fundamentals. The reserve currency won't behave like a safe-haven forever.

Elsewhere, the British pound is on the back foot today, despite a stronger-than-expected batch of GDP data for Q4. A mild tone of risk aversion has also grabbed hold of the commodity currencies.

The only highlight today will be a speech at 15:00 GMT by John Williams, the Fed's 'third in command'.

Beyond that, liquidity will be in short supply in the coming days. American desks will be away for a holiday on Monday, while China and most other major Asian hubs are closed through Wednesday for the Lunar New Year. This raises the risk of sharp moves without much news behind them or even outright flash crashes if any real news hits the wires in a thin liquidity environment. 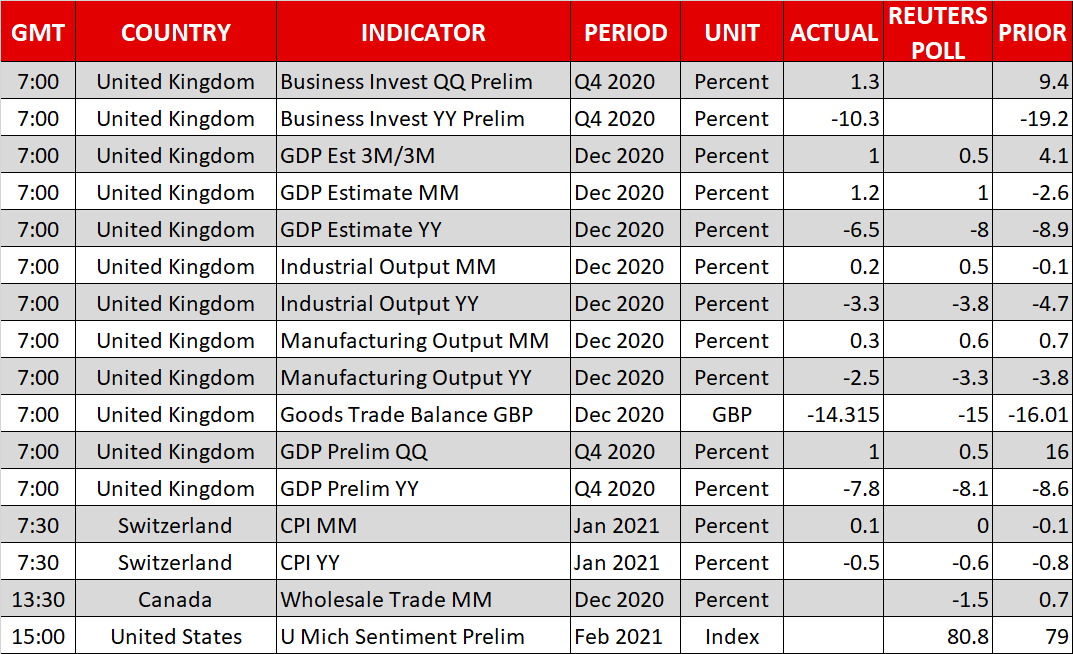