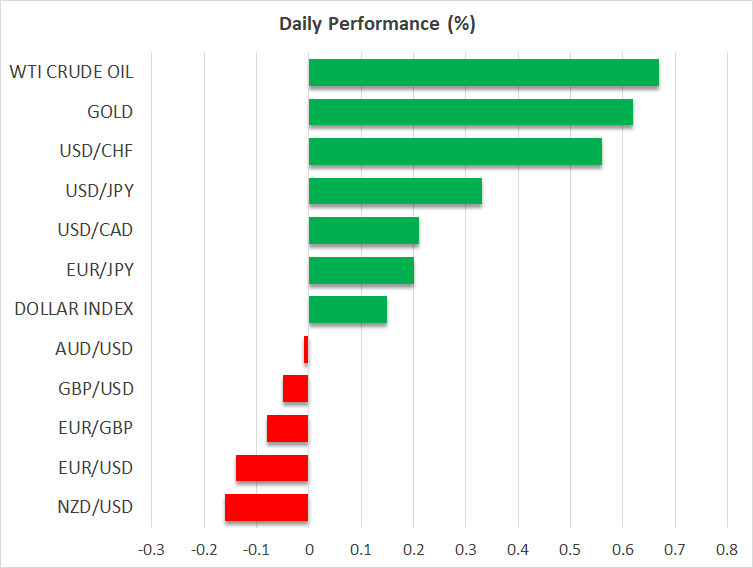 The non-stop rally in global bond yields has started to infect other asset classes, bringing the party in stock markets to a halt and breathing some life back into the devastated US dollar. There hasn’t been any major news, so this repricing appears to be driven by expectations for a cannon barrage of spending from Congress that blows up the federal deficit and powers up the global recovery.

The yield on 10-year Treasuries has ‘crossed the Rubicon’ and is trading at a fresh one-year high near 1.38%, with real rates also moving higher as nominal yields climb faster than inflation expectations. This has grave implications for stock markets.

Negative real borrowing costs have been one of the greatest forces behind the stunning gains in equities this past year, so anything that changes this cheap-money dynamic is a real threat to the party. Consequently, futures point to a lower open on Wall Street today.

The shock waves have reached the FX arena as well, with the yen being the main casualty. Since the Bank of Japan keeps a ceiling on Japanese bond yields, the yen suffers when global yields rise, as interest rate differentials widen against it. This pressure is so overwhelming that the yen cannot shine as a safe-haven, even with stock markets in a sea of red.

As for the dollar, there’s been a striking shift in its trading mechanics lately. The greenback is no longer trading exclusively as a defensive asset and has instead started reacting to US economic fundamentals. It fell a couple of weeks ago when US inflation data disappointed, and it soared last week following surprisingly strong retail sales.

With whispers of inflation growing louder and markets pondering when the Fed might begin to take the liquidity punch bowl away, US economic performance is suddenly a key variable for the dollar once again. If the FX market truly goes back to trading economic fundamentals instead of risk sentiment, better days might lie ahead for the reserve currency, at least against the growth-starved euro.

Sterling and aussie on a rampage, gold resilient

Staying in the FX sphere, the pound has been on a rampage in recent weeks, showing a remarkable ability to absorb bad news without even a scratch. The incredible pace of vaccinations continues, allowing the government to re-open the economy without the risk of having to shut down again, in contrast to the euro area. Euro/sterling has taken heavy fire as a result.

Elsewhere, the aussie continues to reap the benefits of a solid domestic economy that is almost virus-free, with soaring iron ore and copper prices amplifying the optimism. Aussie/dollar briefly touched a new three-year high today, as Australian bond yields have risen by even more than American ones lately.

The odd one out has been gold. Rising real rates accompanied by a firmer dollar would normally be a death sentence for the yellow metal, but bullion is instead cruising higher on Monday, which suggests it is behaving like a safe-haven again. Indeed, the short- and medium-term correlation with stock markets is back to negative, unlike last year when it was strongly positive.