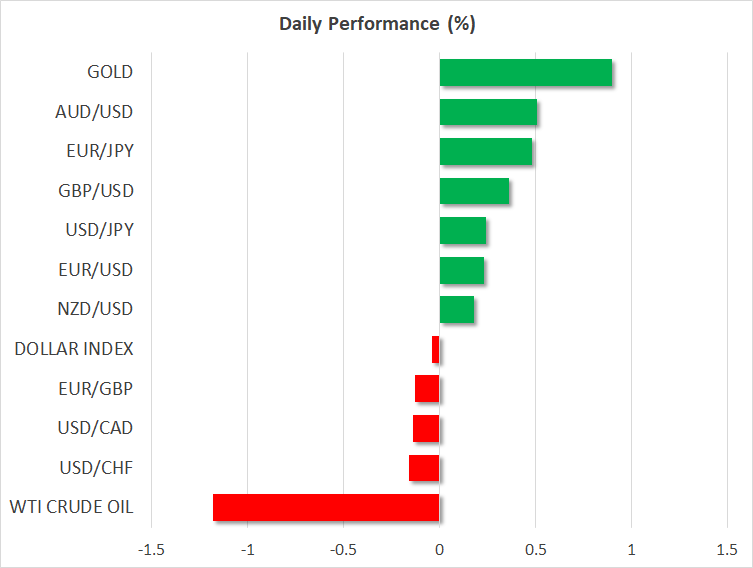 Markets not giving up on stimulus as Trump sows confusion

Risk assets bounced back on Wednesday as investors questioned President Trump’s intentions for abruptly abandoning talks with the Democrats on a new coronavirus relief bill. A few hours after Trump put an end to the negotiations – where progress was seemingly being made – and sent shares on Wall Street crashing by 2%, he tweeted his support for additional stimulus.

Trump wants Congress to approve a standalone bill for $1,200 stimulus checks and to use untapped funds from the CARES Act to provide help to the airline industry and finance the Paycheck Protection Program. His erratic actions, while unnerving investors, look increasingly like an election ploy and that seems to be the consensus building in the markets today.

This is probably an attempt by Trump to choose the timing of when a deal on a new stimulus package should be announced. The incumbent president is currently behind in the polls, with his rival Joe Biden increasing his lead since Trump contracted the virus. If Trump manages to close the gap in the days ahead, he’ll most likely wait until after the election to strike a deal like he has said. But if the polls continue to go against him, he may decide that restarting the talks a week or two before Election Day to make a quick deal might be his best chance to win over some voters.

Either way, markets are unusually calm about the prospect that a new fiscal package may not be in the pipeline for some time. S&P 500 and Nasdaq Composite e-mini futures were up about 0.6% at the European open after a mostly positive session in Asia. European shares, though, struggled a bit, edging slightly lower.

Dollar and yen fall back; Fed minutes may disappoint

The improving risk sentiment following yesterday’s short-lived panic was also evident in the currency markets. The aussie led the commodity dollars higher, gaining 0.4%. The safe-haven yen was the biggest loser, falling across the board and hitting 3-week lows versus the greenback. But gold continued to be dictated by the dollar, advancing above $1,890 as the US currency retreated.

Barring any new tweets from Trump, the main focus for traders today are the minutes of the Fed’s September 15-16 meeting, which are due at 18:00 GMT. Although the minutes are not expected to disclose any new revelations as a flurry of Fed speakers have hit the virtual podium since the last meeting, they could nevertheless shed some light on what discussions took place regarding additional monetary stimulus and what bar to set for raising interest rates.

The Fed has been very coy about what its next response to the pandemic may involve and on providing a more precise forward guidance. But its stance is unlikely to change until after the election and until there’s more clarity about fiscal stimulus.

Investors haven’t had much luck getting a clearer message from the European Central Bank either, whose minutes of its last meeting are published tomorrow. The euro, which has been under pressure lately from signs of a flattening recovery in Europe, was trading higher today, supported by a softer dollar.

The pound was also firmer, reclaiming the $1.29 level after yesterday’s tumble, despite conflicting Brexit headlines. Posturing on both the UK and EU side in the negotiations for a post-Brexit trade deal has dealt several blows to sterling over the past month. But the fact that the talks have kept going even as tensions have flared suggests progress is being made. This was underscored by a report late yesterday indicating that the two sides believe a deal is getting closer, although it also pointed to the talks likely dragging on till mid-November.