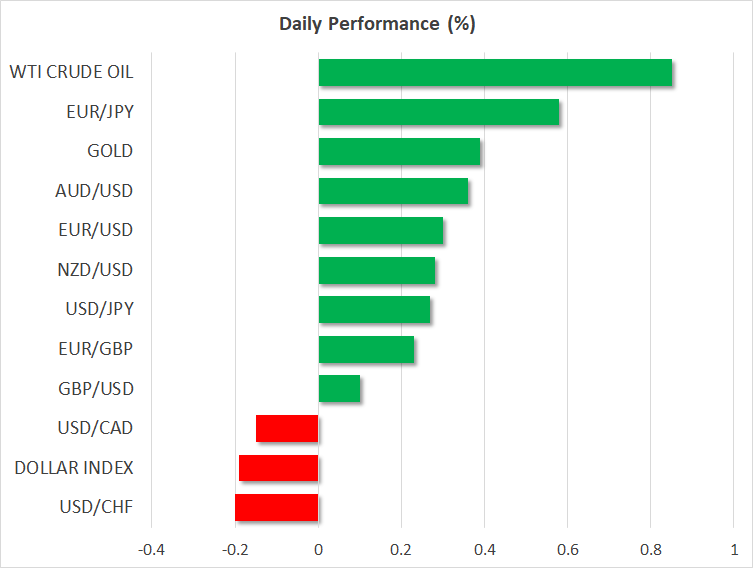 Yellen to tell US lawmakers to “act big”

After a sluggish start to the week, risk sentiment improved late on Monday as investors turned their attention on incoming Treasury Secretary Janet Yellen’s confirmation hearing before the Senate today (1500 GMT), while bracing themselves for a slew of key earnings releases on Wall Street.

In prepared remarks, Yellen called on Congress to not oppose Biden’s spending plans, saying “with interest rates at historic lows, the smartest thing we can do is act big”. Her comments are the clearest indication yet that the former Fed Chair is all for more fiscal stimulus and that the new administration plans to spend its way out of the virus crisis.

President-elect Joe Biden unveiled a $1.9 trillion virus relief package last week, but there are fears it will be watered down by the Senate, which is split 50-50 between Democrats and Republicans. Yellen’s unequivocal justification for greater federal support to millions of US businesses and individuals still struggling from the pandemic is seen as boosting the chances of the package passing through Congress.

However, although any additional stimulus would be welcome by the markets, the bigger prize for investors is Biden’s second proposal, specifically targeting infrastructure investment, which is expected to be outlined in February.

Until then and depending on how many obstructions the current spending plan faces in the Senate, it may be too early for traders to get overly excited.

That’s not to say there won’t be any drivers that could push Wall Street to fresh highs in the meantime as the Q4 earnings season heats up this week. Bank of America and Goldman Sachs will announce their results before today’s market open, followed by Netflix after the market close. With the US economy coming under strain at the end of 2020, there is perhaps more room for disappointment in the current season than in the last and companies are also likely to be cautious with their guidance for the first quarter. Although the opposite will probably be true for stay-at-home stocks like Netflix.

US stock futures were last pointing to a higher open of at least 0.5% today, recouping most of Friday’s losses when equities came under pressure from growing concerns about the deepening global health emergency. Stocks in Asia had a solid session, with the exception of Chinese shares, and European markets were in positive territory as well.

Dollar pulls back from highs, euro and others reverse higher

The improvement in the risk tone weighed on the safe-haven US dollar and yen, both of which slid broadly on Tuesday, having climbed to multi-week highs yesterday. Nevertheless, the greenback’s retreat was modest ahead of Yellen’s hearing when she will reportedly tell lawmakers the US does not wish to pursue a weaker currency, marking a return to a more traditional stance after Trump’s public displeasure at the strong dollar.

The euro was enjoying a bit of reprieve after four straight sessions of losses. It was last quoted at $1.2105 as fears of a fresh political crisis in Italy subsided after Prime Minister Giuseppe Conte won a confidence vote in the Parliament’s lower house on Monday. He still needs the backing of the Senate (expected today), which will be a harder battle to win, but it’s looking increasingly likely he will get enough votes as there seems to be little appetite for new elections amidst the pandemic.

The pound, aussie and kiwi also made up for lost ground, though the loonie lagged its peers as news that Biden wants to cancel the Keystone XL pipeline project with Canada as soon as he gets into office caught traders by surprise. The Canadian dollar faces additional risks when the Bank of Canada meets for its latest policy decision tomorrow.