Bitcoin and crypto markets in general have started 2023 on a solid note despite the recurring scandals that continue to haunt the sector. The king of cryptocurrencies posted a fresh four-month high of $21,642 on Wednesday after an impressive 14-day gaining streak, which was mostly driven by bets of a Fed slowdown amid signs of declining inflation and deteriorating macroeconomic conditions. Will this cautious optimism last or is this just another bear market trap?Cryptos shine in 2023

After a devastating 2022, the beaten down crypto prices are not only exhibiting signs of recovery, but they have also realised significant gains. Even though their latest rally came to a halt after the release of some disappointing US data dented investor risk sentiment, cryptocurrencies seem to be holding up relatively well. This positivity is also backed by other indicators such as the famous Crypto Fear & Greed Index, which jumped above its 50-neutral mark for the first time since April 2022, while the total market capitalization of cryptocurrencies surpassed and remains comfortably above the $1 trillion psychological mark.

Moreover, the so-called short squeeze phenomenon has been a major factor that accelerated this latest crypto advance. It was commonly known that many traders had significant bets against Bitcoin through short positions. Hence, as the upward move in crypto markets started intensifying, traders were forced to buy through the spot market to avoid further losses, which in turn propelled the prices even higher.

Can Bitcoin sustain its outperformance?

Since the beginning of 2023, markets have mostly been in a risk-on mode and Bitcoin seems to be the biggest winner from this boost in risk appetite. The increasing signs of cooling inflation coupled with leading economic indicators pointing towards a recession, increased investors’ bet of a Fed ‘pivot’. These developments induced upward pressure on risky assets, with cryptocurrencies outpacing stock markets so far in the year. 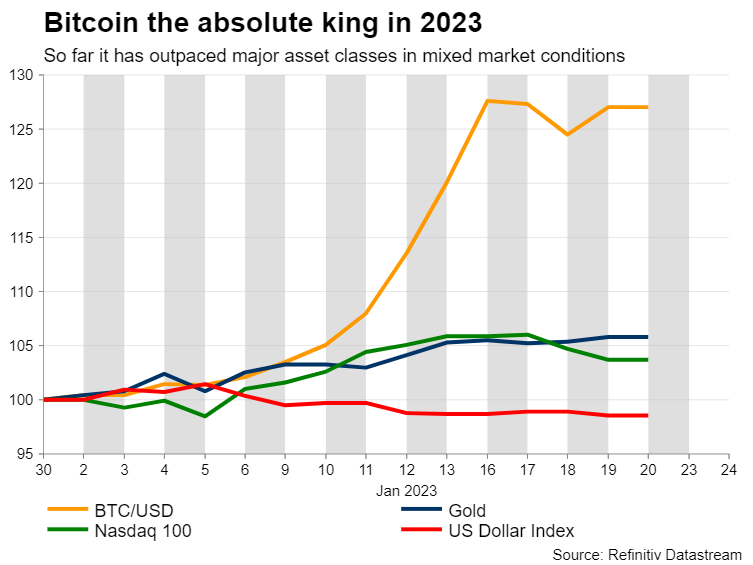 However, even lately, when recession fears started to take over the cautious optimism surrounding a Fed slowdown. Bitcoin managed to hold its ground relatively well, outperforming both major US stock indices and gold. Is Bitcoin's correlation with traditional assets starting to fade?

Interestingly, this latest rally in crypto markets seems invulnerable to the increasing number of scandals that continue to emerge after FTX’s collapse. On Wednesday, Federal prosecutors filed charges against a small crypto exchange called Bitzlato for potentially facilitating the laundering of $700 million tied to the now-shuttered dark-web market Hydra. Things could get even worse as Blockchain data shows that millions of dollars ended up in Binance wallets, despite the strict anti-money laundering that the latter is said to have implemented. Therefore, the systemic crackdown could prove to be devastating in case the contagion has spread to the world’s largest crypto exchange.

Are we heading towards a consolidation phase?

BTCUSD (Bitcoin) has been edging higher after breaking above its prolonged sideways pattern in early 2023. However, the price seems to have entered a consolidation phase since its recent advance got rejected at the four-month high of 21,640.

In the positive scenario, should the price close above the January high, further advances could then cease at the September peak of 22,775. Even higher, the August peak of 25,200 could prove to be a tough obstacle for the price to overcome.

On the flipside, should Bitcoin reverse lower, initial support could be met at the recent low of 20,383. Violating that zone, the coin might test the 18,370 resistance territory, which could act as support in the future.